The Papers – Just Doing The Rounds 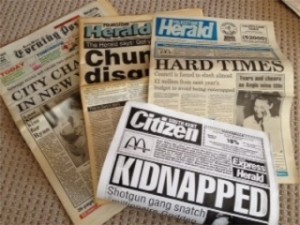 Do you get lots of free newspapers through your letterbox each week?

I must get two or three, all pretty much the same. I skim through the thin pages and then recycle.

Reading one of the papers the other day took me back to my childhood and the days when I used to deliver “proper” newspapers – the national dailies and Sunday papers.

I was probably 14 when I first did a paper round. I got the job after a schoolmate suggested I go and see the newsagent he did a round for. It was hard work. Seven days a week, 52 weeks of the year. Pay was the princely sum of £3.50 per week.

I remember early starts and having to cycle from home to the newsagents very close to Folkestone town centre. We were told because we were teenagers we could not start our rounds before 7am. It didn’t stop a few of us getting in early so we could mark up our rounds and be ready to go just as the hour struck.

For the first few days, I was shown my route by the boss. A man with a fierce temper who tried to give the impression he was nice, fair and caring. I just thought he was a bit of a misery guts who was only interested in money.

He showed me how to fold the newspapers so they could go through “any letterbox” without tearing. It was made very clear that ripped, torn or damaged papers were not acceptable.

And after a few days I was on my own. I decided early on that I would get into a routine and aim to do my round as fast as I could.

I probably got to the newsagents by 6.30am each weekday morning (later at weekends). I’d go to the back of the shop, pick up one of the large, scruffy green delivery bags and find a free place along the trestle tables piled high with newspapers.

Each round had its own brown ring-binder folder. This had strips of paper which listed the names of the customers, their address and the details of what newspapers they wanted to be delivered on each day of the week. Some stuck to the same paper all week. Others chose one paper on a Monday, then a different one Tuesday to Friday and a different one again at the weekend. The strips of paper were arranged in the order you were expected to deliver the papers.

Using the folder for my round, I would mark up the papers. This involved writing the number (or name) of the property and a short version of the street name. For example, Castle Hill Avenue would be marked on the paper as “CHA”.

When all the papers were marked, they were carefully shovelled into the green delivery bag. The laden bag was very heavy. My round was in an area where most people read broadsheets rather than the thinner tabloids and also included business addresses (which naturally ordered papers like The Times, The Telegraph and The Financial Times).

As each week went by, I learnt how to do my round better. I worked out ways to deliver the papers more efficiently. Where there were flats I would only take the papers I needed so I didn’t have to lug the big, heavy bag up several flights of stairs. Some parts of the route it was best to cycle. Other parts I would walk my bike, with the bag sat on my rear pannier.

What used to take me about an hour ended up taking less than 50 minutes and my record was just under 45 minutes.

The round during the summer months was best because the weather tended to be dry and not too cold. Winter weeks were tough – dark roads, rain, sometimes snow. It didn’t make keeping the papers dry very easy.

I only did the job for a couple of years. It wasn’t much money (I think the pay had gone up to £4 per week by the time I finished) but it allowed me to go to the record shop on a Saturday and buy an album to add to my collection.

Being around newspapers every day, I did get to see a lot of front-page and back-page headlines and this may have sown a few seeds for a future career in journalism and 27 years experience of writing for a living.

If your marketing could do with a fresh angle or headlines that really grab your readers’ attention, just drop me a line.