Have I Got News For You?… a journalism journey
The Papers – Just Doing The Rounds 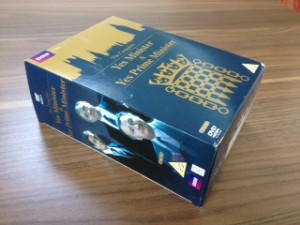 Looking through my small DVD collection the other day, I noticed something. Most of the titles were comedy – films, TV series and “live” stand-up shows.

What can I say? I enjoy a good laugh.

More than that, I can appreciate the writing talent of sitcom scribes and the presentation skills of the stand-up comedian. It’s all made to look so effortless.

One of the few box sets in my DVD collection is the British satirical series, Yes Minister (and the follow-up, Yes Prime Minister). It was a hit in in the 1980’s. I couldn’t help but watch some of the old episodes again.

As I did so, I not only laughed a lot. I also started to see connections between this comedy about politics and modern-day marketing.

The series centres on the (fictional) Department for Administrative Affairs in the UK Government and the battles between a cabinet minister (Rt Hon Jim Hacker MP, played by Paul Eddington) and the Permanent Secretary (Sir Humphrey Appleby, played by Sir Nigel Hawthorne).

Hacker is set on getting his own ideas put into action and on reducing red tape in Whitehall. Sir Humphrey’s role is to keep things as they are and deflecting his minister from doing anything significant. Preservation of the civil service is his goal.

In the middle is Bernard Woolley, the Principal Private Secretary. He serves Jim Hacker but also has to take account of the fact Sir Humphrey has a say in his progression through the ranks.

The result is terrific comedy. It’s well acted and some of the torturously complex verbal evasions of Sir Humphrey are delivered with unwavering confidence by the magnificent Nigel Hawthorne.

Above all, it’s brilliant writing by creators Antony Jay and Jonathan Lynn. On the face of it, the series is a comedy about politics. Yet politicians and civil servants of the day said some of the situations and conversations were closer to the truth than they’d really like to admit. Almost a ‘documentary’ with laughs thrown in.

So, what possible connections could this political sitcom have with modern-day marketing?

In the sitcom, the civil servants talk in jargon and language designed to bamboozle the Minister and cover their tracks. The civil servants understand each other. The Minister is left puzzled, confused and constantly asking his officials “Yes, but what does that mean?”

It’s no different in business. There may be trades and industries where jargon and “technical” talk is useful as a short-form means of communication between employees. When it comes to speaking with people outside the company, that jargon and in-house language could hinder clear communications.

With marketing, you want your prospect, customer or client to understand clearly what you are saying. There may be times when a sprinkling of technical words is valid, as a way to demonstrate you know what you are talking about but this should never be at the expense of clarity.

What’s funny in the sitcom is the way the Minister, Jim Hacker, over time picks up the civil servant phrases and uses those to avoid giving a straight answer to a straight question when he’s under pressure from protestors, lobby groups and even colleagues in Government.

Yes Minister is 35 years old. Yet the themes, scenarios and the way the politics work in the comedy seem no different to how things are today…

Politicians who are economical with the truth, break the rules, and say whatever they think will be popular with the public or their own party.

Civil servants striving to protect their departments, failing to control the purse strings on large contracts (especially involving IT systems), and “jobs for the boys”.

Governments making decisions for their own survival, not for the general public.

Of course, politics has evolved and some things are different now. But the essence has not changed.

And that’s the same with marketing…

Yes, we have Social Media and the growth in online advertising. But the principles of marketing haven’t changed.

And this is where many businesses fall down, waste money and lose sales. The obsession with Facebook, Twitter, LinkedIn and the like masks a truth that most companies don’t really know how best to use these media.

They spend so much time with social media that they ignore the power of tools like email marketing and direct mail. They spend huge amounts of time, effort and money to attract new customers and clients… not realising how much easier it is to attract sales from existing buyers.

A third way the sitcom reminded me of marketing is how each episode presents a problem, a challenge or a dilemma. And it’s up to the Minister (Jim Hacker), the civil servant (Sir Humphrey and/or Beranard) or both to come up with a solution.

In many episodes, the solution is provided by thinking smart, thinking laterally, thinking differently. And it’s no different in marketing.

You have a brief. You are looking to achieve a specific outcome or result. You come up with solutions which will deliver that result. In a rapidly changing scene, those solutions are likely to require a different kind of thinking. Because what worked a few years’ ago may not work today.