Business Has Its Ups and Downs 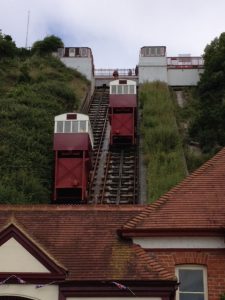 You may recognise it from a travel show or an episode of the TV show The Darling Buds of May, which starred David Jason and Catherine Zeta Jones. It may be the first time you’ve seen such a thing.

This is the Leas Lift in Folkestone, a seaside town in Kent – one of the closest pieces of English land to France across the Channel. On a clear day you can view the French coast from here.

A tourist attraction. A piece of history. A lesson for business.

The Leas Lift opened in 1885 – the year is engraved on the facade of the lower ticket office building. This was in the Victorian era when Folkestone was a highly fashionable resort and a favourite of the London set.

Elegant architecture. Grand hotels. The linear sweep of the The Leas promenade. The seafront. The sunshine. The invigorating sea air. This was a town to be seen in.

One of its novel attractions – the Leas Lift.

A classic example of simple yet highly practical Victorian engineering, this is a water balanced funicular. At the time of opening it was only the third of its kind in the world. Also the first made by Waygood-Otis, the company which would some 15 years later build the first elevator.

The Leas Lift connects the famous Leas promenade at the top with the seafront below.

Here’s the simple beauty of how it works.

Two cars, or carriages, are linked by a rope over a wheel at the top. The brake holding everything in station is released. A tank underneath the top car is filled with enough water to make it heavier than the car on the other track at the bottom. The heaver car descends through gravity and as it does so it pulls the other car up the tracks.

And, with people talking so much today about the importance of being environmentally ‘green’, here’s the really smart bit.

When the heavier car reaches the bottom the water is released into a reservoir there. The water is then pumped back to the top reservoir ready to be re-used for the next journey. Pollution-free recycling at its best.

Back in the late 19th century, Folkestone was a very popular seaside town. Fashionable for those in High Society as well as a haven for ordinary folk just wanting a break. As a new attraction, the Leas Lift proved popular, too.

How it would have advertised itself is easy to imagine:

A simple yet profitable little business.

People wanted to get from the Leas to the seafront, and vice versa. The paths between the two were steep and a longer way round. The lift provided a cheap, quick and simple alternative. At a price people were more than willing to pay. Plus it was a novelty, an attraction, a conversation-maker.

Some track. Two carriages. A bit of cable. A cabin. A ticket office. And a tank of water. Bob’s your uncle.

Folkestone’s wide popularity was not to last. The world changed. Britain changed. New attractions, distractions and leisure alternatives appeared on the scene.

By the time the local council’s lease on the Leas Lift ran out in 2009 it looked as though it would be the finish for the water balanced funicular. Too expensive to run. Consigned to be a twee remnant of a distant era.

But that was not the end of the story.

Like employees who consider a management buyout of a company on the brink of extinction, a group of local people campaigned for the Leas Lift to be saved. A community interest company took over and restored the attraction to full working order.

It’s now running as a business. On a not-for-profit basis.

The Leas Lift is 131 years old – and still going strong. Thanks to people with passion and the support of a community which remembers this tourist attraction with strong affection.

The reasons for using the Lift during the summer months when it is open are much as they were in 1885. For many holidaymakers it is still something novel, something unusual, something a little bit different. Or a  trip down memory lane.

I remember being taken on the lift as a child in the 1970s. The tracks seemed extraordinarily steep and the carriages seemed to trundle up and down like magic. The views across the seafront and English Channel just made you go “Wow!”.

Just this week, decades later, I took the same journey. I usually walk the paths or road up from the seafront to the Leas but this time I saw the Lift was open and wanted to do my bit to keep the attraction going.

The ticket house, top cabin and carriages have been neatly restored. I paid the ticket guy and made my way through to the car at the bottom. I took a place on a newly-repainted wooden bench seat opposite a couple of holidaymakers. The ticket guy closed the carriage door. Water was pumped into the tank of the car above. A bell rang. Our carriage began to make its way up.

I had forgotten how fast the carriages travel. It’s a steady pace but no slouch. As I looked through the rear windows I was glad of my sunglasses as the sharp blue sky pierced through the car. And the tracks are very steep. Steep enough to make some passengers a little nervous, for sure.

The view down over the seafront, out to the Channel and across to France was as good as it ever was. A different experience to the similar views gained from the promenade above. It’s as if you are making a movie and the landscape unfolds in an ever-widening panorama.

Before I could take any more in, the carriage reached the top. Like the Victorians of old, I strolled along the Leas. Still one of the most beautiful promenades in the country.

A nostalgic trip on the Leas Lift behind me.

Like any other business (profit or non-profit) the attraction needs paying customers to survive.

At £1.20 per one-way journey, it remains a cheap and enjoyable experience. I hope others will see the attraction and keep the Leas Lift running for decades more to come.

And if your business marketing needs a lift, you know where to find me.