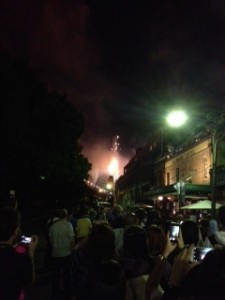 They have a  grip over us humans, don’t they? We can’t avoid watching them swoosh into the night sky and explode in a dazzling display of ear-splitting colour.

And the bigger the spectacle, the better, right?

It’s certainly one of the reasons I travelled Down Under and joined more than a million other people in Sydney to see in the New Year, 2016.

The city is blessed with one of the most iconic harbours and waterfronts in the world. The ‘coat hanger’ Sydney Harbour Bridge, the Opera House and Darling Harbour all form part of the backdrop to what is considered one of the best fireworks displays of the year.

To many in Australia, simply THE best.

Sydney presents two displays on 31st December, the 9pm “family” show and the 12am one to mark the New Year celebrations.

It’s funny how people’s perceptions are different. Everyone back home was asking “Will you get to see the fireworks?” Everyone in Australia was asking “Why are you going into the city for the fireworks – it will be packed, chaos and you’ll take ages getting back home?”

The thing is, watching a spectacular on TV is not the same as watching it live.

For me, it wasn’t so much about getting a prime location view (and having to sit all day just to watch a total of 20 minutes of fireworks over two displays). It was more about being part of something special. Something unique.

When the 9pm show had finished you could walk in the streets and smell the gunpowder as it hit your nostrils. You saw people walking with purpose to find a spot to watch the entertainment with family or friends. There was excitement and energised anticipation of what was to come.

Despite all the warnings about overcrowded chaos, our tiny group found no issues at all. We found a bar where a seat became available within minutes and got served straight away. So much for the “you’ll be waiting ages to get served” advice we’d been given.

We were able to sit, chat and watch the world go by with ease. Then we simply wandered further down the street and found a position from where we could see both the iconic Bridge and the Sydney Opera House. That’s the location from where the picture is taken.

We saw a lot of the fireworks. We heard every rocket explode. We cheered along with everyone else at each flash, bang wallop in the night sky.

It was enough. A way to get a taste and flavour of New Year’s Eve on the other side of the world. Among some of the first people on the planet to see in 2016.

If you’ve not seen the Sydney fireworks before, here’s 12 minutes to explain why people camp all day to get the best viewpoints.

And some say these were not even the best the city has produced. Imagine what the show must have been like to top this.

In some respects, New Year’s in Sydney is no different to New Year’s anywhere else. Some stay inside. Some go for fireworks. Some go out to get hammered. Some make resolutions. Some kiss on the stroke of midnight. Some sit in solitude.

It’s a time of reflection on the year just passed. A time of wondering what the year ahead will bring.

Much is not easy to forecast.

However, one thing’s for sure.

The entrepreneurs who do marketing have the best chance of achieving significant growth. But just doing marketing isn’t enough.

Marketing that is measured.

Marketing based on what works and not on the fad or fashion of the day.

My approach is sales-driven and results-focused.

It’s why clients keep coming back to me for more.

Whether they are in the UK, continental Europe, USA, Australia, Middle East or another part of the world.

There’s a simple economic truth for every entrepreneur.

Every business needs some kind of strategic plan and tactics.

Every business must do marketing.

Every business requires copywriting at some stage.

If your need is now, let’s talk.