Fireworks Down Under
Bowie + Rickman = Heroes 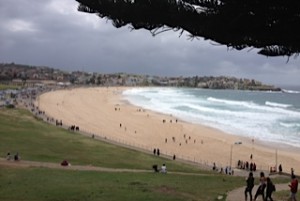 Chances are you’ve heard the word. The name. The beach.

It’s probably the most well-known stretch of sand and surf in Australia.

More than two million people visit Bondi every year. Two out of every five international visitors make a journey to Bondi as part of their trip Down Under.

It’s a part of Sydney which has become a kind of mecca for young backpackers. Half the visitors to Bondi are aged 15 to 29. But it’s appeal is broader than that. Mature travellers also seek out Bondi – if not for its beach then for its restaurants, cafes or shopping.

The picture shows the curved sweep of the beach, taken on a cloudy summer’s day. Yes, there are not many people in this shot. On a hot sunny day the picture would be very different. The beach would be covered in sunbathers, families on rugs, people playing games. The water would be full of swimmers between the red and yellow flags which mark the lifeguard zone… and surfers, of course.

The shops, cafes and restaurants behind the beach would also be buzzing. Just ask anyone about parking in Bondi during the summer holidays.

So, what has any of this got to do with marketing?

Well, it’s down to one word. An important word. One of the most important for any business. And the word?…

Bondi has developed a reputation and created a perception in people’s minds – even those who have never been there.

Mention Bondi and what do you think of?

Tourism officer for Bondi must be one of the easiest jobs in the world.

Millions and millions of people have heard of Bondi.

The most common perception is that it’s one of the “must see” or “must do” attractions of Sydney.

People keep coming back to it.

Visitor numbers appear to be rising each year.

Property prices have gone up and up. You might be surprised at how little you get for your money if seeking a home here.

That’s what happens when you have positioning.

You are perceived to offer quality and value.

You are seen as something special.

You can command higher prices.

You can be more selective about whom you work with.

You may be able to work less and less hard to get the same or better results.

If your are an established entrepreneur or business owner with a great product or service, there is probably much more you could be doing around positioning.

If you’d like some help with that, it’s worth you and I having a conversation.