The Finest, The Highest, The Greatest

Fangs for Visiting
Eyeing up the iPhone 7

The finest? Any superlative will do… 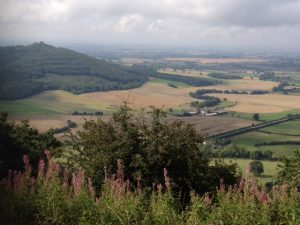 Have you noticed how people are drawn to certain types of tourist attraction?

But the ones with a claim to fame…

The biggest. The smallest.

The shortest. The tallest.

The longest. The deepest.

The lowest. The highest.

The oldest. The newest.

And – as this picture claims…

The picture is taken from Sutton Bank in North Yorkshire. The painter William Turner apparently called it “the finest view in England”. Former vet and author James Herriot agreed.

From this image alone you may not be able to form an opinion.

If someone said “Would you like to see the finest view in England?”… you would be tempted, right?

It’s one of the reasons why superlatives ‘sell’. Humans are curious by nature. Marketing and promotion of attractions plays on that.

“Visit the smallest house in Great Britain”… It’s called Quay House in Conwy, North Wales. You can’t miss it from the outside. It’s painted bright red. The room inside is just six feet wide. Imagine what it must be like to live here.

“Enjoy a pint in England’s oldest pub”… When I visited Nottingham and did that in Ye Olde Trip to Jerusalem it felt like another attraction ticked off the list. But some might disagree…

There are at least TWO other pubs which also claim to be the oldest in the land. So, it looks like bragging rights are important – and people understand the marketing value of the title.

“Marvel at the tallest tower in the world”… at the time of writing, it’s the Burj Khalifa in Dubai. At 830m (2,717 feet), it would dwarf numerous hills and mountains in Britain. For comparison, it’s on the way to THREE times the height of the Shard in London.

“Have your picture taken by the sign of the longest place name in the UK”… you may have guessed that’s that strange sounding place in Wales… Llanfair­pwllgwyngyll­gogery­chwyrn­drobwll­llan­tysilio­gogo­goch.

I won’t ask you to pronounce it. It’s usually shortened. When I lived and worked in Wales I called it LlanfairPG. And, of course, visited… and had my photo taken by the sign.

However, it’s not the world’s longest place name. I think somewhere in New Zealand still holds that record.

Who in the UK has not heard of Land’s End (the most westerly point of England)? And most people would say the most northerly point is John O’Groats. Which is why people go there…

… yet John O’Groats does NOT hold that title. That record goes to Dunnet Head. But who has heard of that?

Search for the shortest pier in the UK and it probably looks like the one at Burnham-On-Sea clinches it.

Yet others may say – with a little bit of tongue firmly in cheek – that the title should go to Wigan Pier. (If you’re unsure why this is said with a smile, just Google it).

Every year, ‘tourist’ climbers pay a small fortune and put their lives at risk to stand on the top of the world.

Everest is the highest mountain. Yet, for the purist mountaineer it’s not necessarily the most beautiful or best… or most challenging.

The second highest mountain is K2. It’s considered a more technically difficult climb. Statistically speaking it also has the second highest fatality rate of all the 8,000m-plus peaks. It’s known as the Savage Mountain for good reason.

The highest point you can stand on this Earth.

So, whether you are a tourist attraction, a natural feature of this earth or a business…

It can help if you can say you are Number 1, the Greatest, the Best, the Favourite or even ‘The Finest’.

Of course, it helps if that is backed up by a great product, great delivery and great customer service.

You might get one sale. But not repeat business. Not to mention few or no referrals.

If your business has no ready-made superlatives to promote you’re going to have to work harder on your marketing.

If you would like some help with the words why not see what I can do for you.

P.S. Does Sutton Bank offer the ‘finest view in England’?… Well, it’s pretty good but I think there are better views available…

… What they could promote more is the nearby visitor centre, cafe and a variety of walks in the area. That makes it more than just a quick photo stop. I becomes instead an hour, two hours, or a planned half day or even whole day of possibilities.