Walk Together – Navigating Your Way
The Finest, The Highest, The Greatest 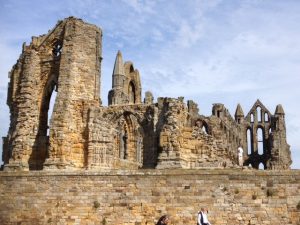 This is Whitby Abbey.

Take a good look. Not some stock photo taken off the internet. I took this one myself on a smartphone camera. Just call me David Bailey…

But we’re not here to talk about my photographic skills.

This is about marketing, branding and how easy it can be.

Sink Your Teeth Into Whitby

If you live in the UK, chances are you’ve heard of Whitby.

It’s a town on the north east coast with a fishing harbour and houses set on steep hills below the striking headlands either side of the River Esk, which flows into the North Sea.

It’s known for great fish and chips. Better known for its famous Abbey.

The people marketing this tourist attraction must have one of the easiest jobs in the world.

They could say visit the Abbey – it’s filled with history.

“A story which begins in AD657 and continues today. A tale of Anglo-Saxons, formidable rulers, war, the ravages of time and weather… and much more.”

They could say visit because it’s architecturally fascinating.

“Explore the ruins and imagine yourself back in the 13th-century surrounded by this Gothic masterpiece.”

They could say visit because the views are wonderful.

“Take your time to sweep through a mesmerising panorama of the town, harbour, sea and neighbouring St Mary’s parish church and graveyard”

Or they could just say visit the place which inspired Bram Stoker to write Dracula.

“Imagine an early winter’s evening as the sunset begins to fade. The blustery wind sweeping across the headland. Long, dark shadows beginning to form in and around the Gothic structure. Bats preparing for night in the churchyard. A place where you would not wish to be alone. What was that? Is somebody there?…”

Words Are Not The Only Fruit

Countless words could be written to eloquently describe this attraction (and the town).

But the simplest way would be to simply show a photo of the Abbey ruins. Not like the one shown here. It’s taken from the wrong place, the wrong angle at the wrong time of day…

… the image would be taken at sunrise or – better still – at sunset. The Abbey ruins in silhouette. Deep, long shadows. Colour fading from the sky… pale blue with a hint of blood-red orange. A wide shot revealing the headland and maybe even the parish church.

Then add a caption. Something like “Visit Whitby Abbey – the inspiration for Bram Stoker’s  Dracula”

The Abbey attracts around 150,000 visitors a year.

Not bad considering its location and all the competing tourist attractions in the region. And I’m sure it could do better.

The visitor numbers only include those who go inside and pay (or enter free as members of National Heritage which runs the site). The figure for how many see the ruins – from the car park or grounds outside – is, I would guess, much higher.

Whitby has broad appeal. No visit to Whitby would be the same without going up the famous 199 Steps to see the Abbey… at the very least from the car park outside.

The tourist attraction has an appeal to people with an interest in:

No doubt you have other words in mind to add to the list.

The Abbey has a strong brand. So how might it be marketed better?

Here are some thoughts just off the top of my head…

Gather STRONG photographs of the Abbey and its surroundings which make people go ‘Wow! I want to go there’. Get these images on websites, in blogs, in magazines, in newsletters, in newspapers. Far and wide.

Target book clubs. Bram Stoker fans and gothic novel groups. Link up with one or more local bookstores (e.g. “Buy a copy of Dracula and get 10 per cent off your Abbey entry” and “Visit the Abbey and get a voucher for 10 per cent off any book at Whitby Wonderful World of Books”). Organise a book reading in the grounds.

Have professional photographers’ images of the attraction in galleries, cafes, art centres and other places in the town and surrounding areas. Don’t stop there. Have them up in other parts of the country, too.

Encourage TV, video and film production. Get featured on travel shows. Have local festivals covered in the media and get the Abbey featured. A music festival could have a recital on site.

Offer ‘Walks for Health’ which take in the Gothic ruins. Promote short and longer distance walks which  start, finish or can pass by the site.

Is there an educational package you could offer schools for a day trip or local project?

Marketing On The Doorstep

National Heritage should be doing all it can to encourage people into the Abbey.

Signs or A-boards positioned strategically outside the site could promote offers. “Visit the Abbey today and get 3 months  National Heritage membership FREE” or “Ask at the ticket office how you can get FREE entry today”.

How many of those who are not keen on paying the entry fee (about £7 or £8 at time of writing) might be persuaded by something like that?

If they don’t know there’s a deal they may not bother to even go to the ticket office. They’ll just take their photos from outside the walls and head back to the harbour for an ice cream. Or fish and chips.

There are many, many more ideas marketers could come up with.

You have to give people EVERY reason to visit.

Whitby was very busy when I visited during the summer. It must be doing some things right.

No room for complacency.

And, of course, if you’d like some fresh ideas for your marketing you know where to find me.

As Dracula would never say…