Eyeing up the iPhone 7

The Finest, The Highest, The Greatest
MOT – Does Your Sales Letter Pass The Test? 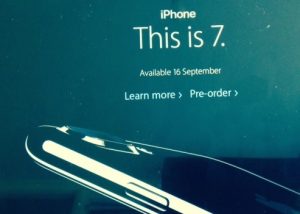 It’s the latest upgrade to its best-selling product.

This is All You Need To Know

They will look similar to the current 6s and 6s Plus but include:

And perhaps the BIGGEST talking point of all…

The new models will NOT have the usual headphone jack.

Instead, people will get their new phone with earphones that fit into the device’s Lightning port (which you currently use for charging and the transfer of data).

What You Can Learn From Apple’s Launch…

So, what does all this mean and what lessons are there for business?

Well, as usual, the new phone arrives with a big launch event. It’s designed as an experience – something fans can tune into and be a part of.

Apple will sell a bucketful of the 7 series. They always do with the iPhone. Whether it will be as fast-selling or successful as previous models we have yet to see.

The phones will find new buyers at different points over the years which follow.

Die-hard Apple fans and early adopters will pre-order before the official sale opening on the 16th September – or rush to the retailers and phone shops from day one.

Some will adopt a wait-and-see approach, wait until the initial fuss has died down… and hope there are still units left when they go shopping.

Others will be prepared to wait months – even years – before investing in the ‘new’ upgrade. Then you have those who will use the post-launch period to find a bargain on the ‘old’ model. Will you be one of the cut-price iPhone 6s or 6s Plus hunter this autumn?

Apple will be taking advantage of these buying groups… and you can do the same with your products or services. Every time you upgrade there are opportunities.

Sometimes you do not need to reinvent the wheel or come up with something completely new. Just make an improvement to your current offering – and charge accordingly.

What about the big controversy?

Apple is no different to other giants. Just think of Facebook. These guys will do what they think is best for THEIR business. Remember, they’re in it more for their own profit than to please everyone.

The decision to remove the traditional headphone jack will annoy many iPhone users. Instead people will have to get used to a different way of listening.

The new devices will come with Lightning-connected EarPods and wireless AirPods. There will be an adaptor so you can continue to use traditional headphones but you won’t be able to charge your phone at the same time.

It may well be that the fuss and anger will die down over time. As happened with the introduction of the Lightning connector with the iPhone 5 in 2012.

The company is banking on people being so keen to get their hands on the new model they will ‘forgive’ the less popular changes.

Apple will also be helped by the fact its rival, Samsung, has issued a recall of its Note 7 model due to safety concerns.

For other retailers, the iPhone 7 launch is not a time to sit and gawp.

There are opportunities here…

Companies on the ball can piggy back on the promotion. For example, the day after Apple’s unveiling, I received a marketing email from John Lewis. Guess what it was attempting to sell me?… Wireless headphones.

Even if someone does not buy straight away… they now know that John Lewis sell different kinds of headphones… including ones which might go well with your new iPhone 7 when you’re ready.

Apple still has to keep marketing. Saying something that will make somebody want the next best thing is probably not the most difficult job in the world. Yet it still needs to be done.

If your business doesn’t quite have the same brand loyalty or ready-made sales do not fret. You can still make money.

The right marketing – with the right messages to your audience – goes a long way to making that possible.

If you would like help with that you know where to find me.

Good copy costs the same as bad copy. Might as well place your bet on the more likely winner.

Drop me a line… or give me call (you don’t need an iPhone 7 to make it with ZERO obligation).