The Duke of Edinburgh 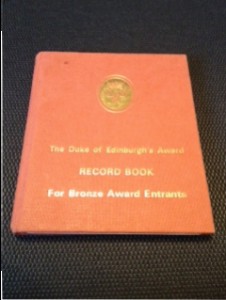 The Duke of Edinburgh?

I haven’t met him personally but he has featured in my life.

When I was a teenager I took part in his widely-acclaimed Award scheme.

It was a way of encouraging young people to get involved in some good deeds for society, learn something new, take on a physical challenge and test their sense of adventure.

There were three levels – Bronze, Silver and Gold.

You can see my record book for the Bronze Award in the picture.

It’s more than just a book. As you read on, you’ll see it holds memories and stories. Some of international importance.

I may have mislaid the badge over time. The certificate is still here, in an album.

The award wasn’t given to me by the Duke of Edinbugh in person. You had to get the Gold for that – and even then it might have been someone else who did the presentation. He was a busy guy, that Duke.

To get the award there were four elements to pass.

I almost failed before I’d started. The programme was being offered through my school and messages about the scheme were given out at the end of morning assembly. For some reason (possibly because some teachers had what seemed like an eternity of messages to read out and I got bored listening) I failed to hear one about the physical education bit.

All I heard from one of the PE teachers, Mr Herbert, that morning was “blah, blah, blah… and for those doing the Bronze PE the last session available is lunchtime today”…

That got me listening!

Straight after assembly I rushed over to Mr Herbert and explained I was meant to be doing the PE bit but, er, had not done anything yet. I was worried I would fail at the first hurdle. The teacher was not. Calm as you like he just said “See me in the gym at lunch break. Bring your PE kit”.

Foregoing my usual lunchtime game of knockabout football on the school playing field, I turned up at the gym and got changed.

I can’t recall exactly what the PE test involved. I think there was a squat jump (to see how far you could leap from a squatting position – not that far in my case, but enough to score some points). Probably something else. Finally, there were sit ups. The target was 80.

I felt sweaty but fantastic. Something I’d never done before. I’d met the challenge and gone beyond.

That performance impressed the teacher. It also gave me bonus points for my Award. The Duke would have been proud. I know I was. My face was beaming. Or maybe it was the redness of exertion on my skin.

Either way, result. I had passed the PE test.

One down, three to go.

For the second element, you had to demonstrate interest in a hobby or “interest”. My biggest passion at the time was football but I wasn’t sure this counted.

I was quite keen on cars but wouldn’t know how to demonstrate that, apart from showing the assessor a couple of packs of Top Trumps cards or telling them how I’d cycled with my elder brother 25 miles to visit a car show… largely to see (and sit in) what I regarded as a futuristic-looking Rover 3500 (SD1). But I put the brake on that idea.

And my interest in photography hadn’t really taken off at that point.

Which left me with… stamp collecting.

Well, they say philately will get you anywhere. (Which is a joke all stamp collectors will enjoy).

Yes, I’d got into this stamp collecting lark by accident. When I was younger (maybe 8 or 9) I got taken into the High Street toy shop (as a clear parental bribe for having to walk for ages to get into town). The deal was – find something you like, it will be bought for you.

I knew we didn’t have much money. And finding something inexpensive in the toy shop was difficult. Some days I would spend what seemed like ages searching the shelves and stands and not see anything I liked (that was within budget)… so I just walked out empty-handed. I didn’t want something bought for me just for the sake of it.

One day I went in, and there was a similar story. I couldn’t see anything I really wanted. Action Man figures and accessories were just too expensive for consideration and I’d got just about all the toy cars and Lego bricks I could want.

Time was getting on. I could sense impatience. I had to make a choice or leave. That’s when I noticed a packet of colourful stamps. The price was right. Sale made.

Next time I bought an album to stick the stamps in. Then I bought more stamps. Then I started to get interested in whether any of these perforated postage paper squares, rectangles and triangles were actually worth anything.

I became so fascinated by it that one Christmas I asked for a Stanley Gibbons catalogue book. Now, this was NOT a small book by any means. It was a beast of a doorstop, for sure. Bright orange cover. As big as a box file. Hundreds (if not thousands) of thin pages, each covering the most popular stamps from across the globe.

At this point, you may be thinking “What a nerd” or “how dull and boring” was that. And I can understand how it might look that way. To the uninitiated.

Because it wasn’t just about collecting stamps and putting them in an album.

That catalogue. That orange brick of a book. It was a treasure-trove of education.

It was from this book that I learned about some of the most important events in world history (sets of stamps are often released to mark or celebrate significant moments in time).

It was from this book that I learned about countries and places I never knew existed. Places like Trinidad & Tobago (in the Caribbean), Vanuatu (in the South Pacific) and the Falkland Islands (South Atlantic).

When the Falkland Islands conflict first made the news I was probably one of the few people in the UK who had (a) heard of it and (b) knew where it was on the globe. The war was a terrible thing, for sure. A place that nobody knew about and politicians hadn’t cared about was suddenly a place we (in Britain) all wanted to protect.

I won’t get too deep into the politics here because it makes me angry every time I think about it. The war was hailed a victory but at what price? All Mrs Thatcher could say was “Rejoice”. Those words just stuck in my throat.

What you may not know is that Britain used to patrol the waters around the Falkland Islands – to stop Argentina (or any other nation) thinking of invasion. But the Tory Government chose to make defence cuts. One of the casualties was the patrol boat. A decision that would cost many human casualties (on both sides) later.

Not so long after the patrols ended, Argentina invaded the islands and took them over. Britain sent an ageing fleet, and brave soldiers and sailors to the South Atlantic. Some would not return home.

Was the withdrawl of the patrol ship a signal to Argentina we no longer cared about the Falklands? I know what I think and you may make up your own mind.

History. Geography. War. All connected to a set of stamps from a small island thousands of miles away.

So much for philately. I passed that with flying colours. Two down, two to go to achieve my Duke of Edinburgh’s Award at Bronze level.

You had to do Community Service. I chose to work with the police.

We visited the local police station and were given a talk about the police and the role they play. Our group of students was not the first to hear this presentation and we’d asked those who’d been before what to expect.

So, the surprise the police officers sprung on us was not really a surprise. What they did was this.

Part way through the talk, we were told about the importance of being observant. Shortly afterwards, a man entered the room, handed the presenting officer with some documents and then left.

The officer then said it was time for a test. Could we give a full description of the man who had just walked in and out of the room?

Naturally, my friend David and I thought this would be easy. We knew this bit was coming. We’d prepared ourselves for it. So we got down to writing down what we could remember…

… and it was REALLY difficult.

I was much worse at this than I thought I would be. David did rather better. I put it down to his father being a policeman. He’d probably had training at home in secret. Yeah, that would be it.

At the end of all the sessions we had to take a test to see how much we could remember. If I recall correctly, I wasn’t able to make the group test session so I had to take the “exam” seated in a room in the police station on my own.

I passed. Three down, one to go.

The final challenge was the biggest of them all. A two-day expedition in Kent involving hiking with a rucksack and camping gear, navigation and team work.

Most of my friends were in the Scouts so this was just another walk in the park for them. For me it was a genuine adventure. I’d never done anything like it before.

I remember everyone else seemed to have a smart new rucksack. Mine was a cheap old thing and it weighed a fair bit, especially once a camping stove and tent parts were added to it. There were to be no dramas. It all panned out according to plan.

Our team of four had good navigational skills, at least one of us knew how to cook on a camping stove and putting up tents was easy with two Scouts in the group. We all played sport so we were reasonably fit. The walking was pleasant in the sunshine.

We had to do a project around an ancient site north of Canterbury. We made some sketches, took some notes, answered the key questions and made our way to base.

Job done. Four out of four.

The Bronze was mine!

Silver and Gold eluded me. I was so into sport that I spent more time playing football or cricket after school, or got out on my bike to cycle 15-20 miles before dinner. That’s how it was in those days. You didn’t think anything of going out for hours on the local recreation ground or riding along busy roads.for mile and miles.

They’d probably call social services or something these days. Fear was never in our minds when we were away from home.

So there you have it.

One book. Many memories. Plenty of spin-off stories, too.

Thanks, Duke of Edinburgh.