The Duke of Edinburgh
The Strategic Copywriter – A definition 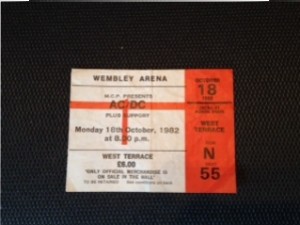 The event… a concert by heavy rock band AC DC.

And I was there.

I’ve kept my ticket for the gig for more than 30 years!

I can still remember the night as if it were yesterday.

It was my first “big” gig. One of the biggest bands in the world at the time (they still are big, by the way – with another world tour this year). Playing in the capital.

I was still a student at the time. The show was on a Monday night so I still had to be in the next day for lessons.

Rushed home from school. Got changed. Went to the train station. Took the train up to London from the Kent coast, got on the tube (the London Underground) and headed for Wembley. Home to the famous football stadium but also where the indoor Arena was based.

The tube carriages were really busy. It wasn’t too difficult to spot where a good portion of the passengers were heading. Denim jeans, denim jackets (some studded, some awash with pin badges) and T-shirts proclaiming the wearer was a fan of AC DC.

I was going to the gig with my elder brother and one of his mates. As we left the tube and headed into the streets the crowds become even bigger. It was like a community of worshippers heading for the congregation. Nothing holy about some of the language, though.

Inside we took a tour of the various stalls selling the usual tour memorabilia – posters, photos, T-shirts, etc. I bought a T-shirt. It probably cost four or five quid. Maybe less. The ticket had only cost me £6. A bit different today, for sure.

I put my black T-shirt over the one I was already wearing – and instantly felt more like part of the gang.

Moving into the arena auditorium the atmosphere really began to feel more like a rock concert. Seats were filling up. Some people sat but most were standing. Roadies were still working on the stage, arranging kit, wires and stuff.

In the background, assorted rock and heavy metal songs were being belted out through a barrage of huge speakers. It was loud enough for you to have to raise your voice to be heard in conversation.

I can’t remember the support band, I’ll hold my hands up. I was only there to watch the main act, AC DC.

Their set opened with a giant bell hung down from the main stage. The opening sounds were of the bell being struck. Boing… Boing… Boing…

… and then the guitars kicked in… then the drums… and it all went crazy.

I thought the music played to keep the crowd entertained during set-up was loud. This was something else.

The room shuddered with the noise and vibration caused by every crash of the drum, topped up by the buzz flying off the guitar strings.

I’d obviously listened to AC DC’s albums on the record player – including the classic Highway to Hell and the classy Back in Black – and turned up the bass.

But this was a different sound altogether. The band played the songs just as they sounded on record, pure and earthy, with those distinctive raw-edged vocals of Brian Johnson and the effortless riffs reverberating off Angus Young’s guitar.

But TEN times louder. This was ear-splittingly loud.

The crowd knew every song. Every lyric. Every word. We banged our heads. We added our vocals to each song. We played air guitar.

There was only one downside. I had to get back to the Kent coast. That meant catching the last train home. A train leaving from the other side of London. And services to the seaside were limited. They didn’t run through late into the night.

It meant I had to leave the gig before the finale.

As I left the Arena I realised just how loud the sound had been. Both my ears were ringing. Throbbing. Pulsating. I wondered if I would ever hear properly again.

Got on the tube. Made my way to Charing Cross and caught the last train with minutes to spare. Exhilarated, partially deaf and very happy. What a night!

And my enjoyment of AC DC has never waned. I still listen with pleasure to this bands uncomplicated brand of music.

The ticket I treasure doesn’t just take me back to that gig, that night. It makes me think about branding and marketing. We can all learn from heavy rock.

In business you are looking for leads or prospects, people who MIGHT buy what you have to offer. Let’s call it your crowd.

Well, AC DC certainly had a BIG crowd. If you were into heavy rock, chances are you LOVED AC DC. They built a brand without even trying.

Their concerts were usually sellouts or near sellouts as far as I could see. And this was in the days when there was no Facebook, hardly anybody knew about the internet or websites, and marketing was old school.

In the case of gigs, if you wanted to know who was playing when you bought a music newspaper or magazine, like NME or Kerrang. Searched through the ads and found the band you wanted to see. Then you rang the venue’s box office or turned up in person at the box office to buy your tickets.

There were ticket agencies but nothing like the plethora of them today. And back then there were certainly few of the shenanigans you experience today. Fewer rip-off merchants. Today gigs sell out in a matter of minutes and seconds. Back in the 70s and 80s you had a great chance of getting a ticket if you were reasonably quick. Today you just spend manic minutes at a computer, desperately hoping you can book online straight from the ticket launch.

AC DC had a big crowd. They still have a big crowd more than 30 years on. Why is that?

Because they knew how to capture their crowd. Articles in magazines. Adverts for the gigs. A proper fan club. Word of mouth…

I got into AC DC after I had heard Highway to Hell. I had not heard that until a schoolfriend introduced me to it. After that, I was telling other mates about this band. Word of mouth. The most powerful form of marketing (and the cheapest).

What the fans, the buyers, got (and still get today) was a consistently strong product. Pure heavy rock music.

No glam-rock outfits. Some special effects on stage but not over the top (it may be different today). Music which rocks. A consistently high quality of songs. When you hear an AC DC song you know it’s by AC DC.

The lyrics are all about blokey things. The sort of thing you might hear in bars over a pint or six. Never quite sure how serious the lyrics are. They sometimes feel like they’re just for effect rather than meant with serious intention.

So there’s a strong appeal to guys (and clearly some appeal to the gals, judging by the band’s fanbase).

The band has old fans. It has new, younger fans. That gives AC DC continuity of business.

They keep delivering the goods. If they hadn’t, people would have dropped them like a stone. The band would have fallen by the wayside like so many pretenders to the rock ‘n’ roll crown. The band line-up has gone through some changes but the brand and the quality has remained strong.

These guys have done very well for themselves. They’re all millionaires. Just from making a bit of music together and sharing it with the world.

Yes, definitely some lessons in how to run a sustainable business with this band.

AC DC, we salute you.