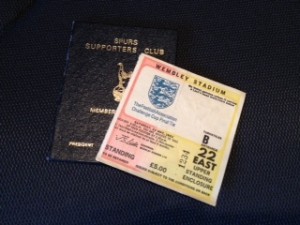 A name in every football fans heart. Home to the FA Cup Final and England international matches.

The Wembley Stadium you see today is smart, modern and unmissable with it’s high looping arch. It will never quite match the old place with its iconic twin towers.

Not when there is so much history attached to it. Not when it had a special place in your heart.

Take a look at the picture. It’s a ticket for the FA Cup Final of 1982. My ticket. Still a teenager and this piece of paper would secure my first ever visit to Wembley.

A chance to see my football club, Tottenham Hotspur (also known as “Spurs”), go for their second FA Cup trophy in as many years (they beat Manchester City 3-2 in a replay in 1981).

How did this opportunity arise?

When I was at school in Kent, I followed Spurs. They were a London club and played attractive football without always getting the best results. I watched highlights of their matches when they were shown on the television on Sundays (the day after the match – there were no Sunday or Monday games in those days).

Usually on a show called “The Big Match” on ITV with an excitable yet authoritative commentator called Brian Moore.

If you’ve no interest in football you may not understand what being a fan means. It is a life of ups and downs. Usually more downs than ups (unless you only follow a team because they are winning everything at the time – which a lot of youngsters did and still do).

I was a Spurs fan. I knew the names of the players. I knew their position on the pitch. I knew a bit about the club’s history, some of it’s brilliant achievements.

In 1976 I joined the Spurs Supporters Club. That’s my membership card in the photo behind the Wembley ticket. This meant I gave the club some of my pocket money each year. In return they sent me news and free entry into a draw should the club ever reach a cup final.

That same season, 1976-77, Spurs did the unthinkable. They got relegated. The end of a 27-year stretch in the top flight First Division (which is the equivalent of today’s Premier League). And they did it in style. Ending up bottom of the table.

There’s a saying of “top” clubs that they are “too good to go down”. That season proved the saying wrong.

This was a club filled with good players, including my idol and one of the most naturally talented players ever to grace the game… Glenn Hoddle.

Thankfully, Spurs got their act together the following season and in 1978 they secured promotion to the top league again. I kept newspaper clippings of the sports reports on the games. Along the way the team enjoyed some fantastic results, including a memorable 9-0 drubbing of Bristol Rovers at White Hart Lane.

Four years later, Spurs worked their way through the FA Cup competition to reach the final at Wembley. Our opponents would be Queen’s Park Rangers. On paper, Spurs should win.

No, not the national lottery, Euromillions or any other cash lottery. This was the random draw for Spurs Supporters Club members. And I was one of the lucky winners.

I was 16 and heading for Wembley.

As it happens, one of my teachers at school was also a big football fan and he had already got tickets for the Cup Final. He kindly offered to drive me to London for the game. Do that today and there’d no doubt be an inquiry. Different times. Different times.

This was in the days before the Hillsborough disaster and all-seater stadia. Wembley was largely standing room only.

The walk to the stadium was exciting. It seemed like a whole town had turned out to watch the game. The pavements were three and four deep with people. Lots of chatter. Lots of banter. Plenty of laughs.

Inside the stadium, I made my way up the stairs to a section high up behind one of the goals. There was barely room to move. It was packed. Many dressed in the blue and white colours of Spurs – hats, scarves and tops. It was May but it was still cool in the stands.

I don’t recall much of the match now. Reports said the game was a bit dull so that may have something to do with my miserly memory of it. I do remember we scored first. A Glenn Hoddle shot from just outside the box took a slight deflection into the QPR net at the other end of the ground.

If you’ve ever been to a game you’ll know how when the action heads towards one of the goals, the fans start to lean forward and stand even taller (even in the seats of today). There’s an increase in the volume. The crowd anticipate a goal or some goal-mouth drama.

So as Hoddle received the ball, I and all those around me leant forward, as one, and looked on with expectant hope. It can seem to take a few seconds to realise the ball has gone in the net. When the crowd knows it goes wild. There’s arms up in the air, jostling, patting of backs, spillage of beer, and a deafening roar of “Yeeeesss!”

In my memory, I thought the goal had been scored in the normal 90 minutes. In fact, it came deep into extra-time. Sadly not deep enough for QPR to grab a throw-in, get a flick on and score with a close-range header. I think it was Fenwick who scored. At the end I was standing.

Not the result I’d hoped for. A 1-1 draw. No victory. No seeing the presentation of the trophy. It would (as a year earlier) have to go to a replay.

Quite a day, though, for a young fan. I could say “I was there”.

The story is one of hundreds which mark my life. It’s a natural thing to write about it. Part of the armoury of a results-based strategic copywriter and marketing consultant.

And one of the things which makes me different to the average copy guy is I look for lessons or messages in such stories. What can we learn from them? How could we apply it to business?

So let’s take the Spurs and Wembley Cup Final story.

What springs to mind…

Being a member of a club gives you a sense of belonging.

You are never “too good” to fail.

When you fall, pick yourself up again.

You can have the best looking, fancy set-up but it doesn’t guarantee you results.

If you don’t aim for goal you’ll never score.

On paper is ALWAYS easier than the reality.

The more people want what you have to offer, the easier it is to sell it.

If you go out of the way for someone it’s NEVER forgotten.

You cannot live off last season (or the last year). You have to be as good again, and better, this time.

Take opportunities when they come to you.

People love (and will pay for) experiences.

Buying is an emotional act.

You may have discovered your own lesson or “note to self” from this story.

How did it end?

Class rises to the top.

Oh, and of course, the value of everything changes…

Who would have thought it?