Terry Bradley
EU Referendum – The Shambles (and the Lessons from It) 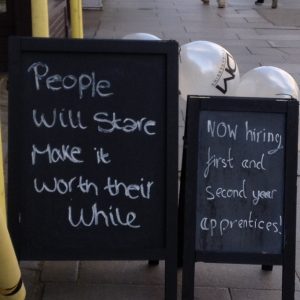 When was the last time you took a wander along the High Street?

If if it’s any time recently you may have noticed a number of shops, stores and cafes doing something to catch your eye.

Yes, some have bright, colourful displays in their windows. That’s one way of doing it.

Others have taken to taking their message into the streets – with free-standing advertising boards. Boards like the ones you see in the picture.

Boards which sit on the pavement like a silent beggar. You approach them, not wanting to look but unable to resist a downward glance.

Boards arranged in such a way they act as a pedestrian barrier. One you are forced to take notice of and swerve to avoid a banged food, ankle or knee.

Boards which – if written properly – give you a reason to stop, consider going inside or taking up an irresistible invitational offer.

The picture you see is outside a hairdressing salon.

As you can see they’ve really gone to town on this. Not one board but two. Plus some balloons.

Each board carries a different message.

The one on the left says: “People will stare Make it worth their while”.

As advertising or marketing messages go, it’s admittedly not the strongest. It’s trying to say something of interest to people but doesn’t hit the mark.

It’s trying to say others will notice your hair so you might as well have beautiful hair. That is, get a great haircut. It could have said this in any number of better ways.

It could appeal directly to ego or vanity: “We make YOUR hair look AMAZING!”

It could appeal to social worry or concern: “New Style? You’ll love it. They’ll love it.”

It could appeal to what a haircut is all about: “Look gorgeous. Feel gorgeous.”

Or the message could have been an offer – based on price, discount or time of day.

“Get 20 per cent off your first haircut”

See the difference between these suggestions and what’s on the board?

If you have space for you message, make the best use of it.

The second board, on the right of the picture, does a slightly better job but still leaves room for improvement.

If you were looking to get a foot in the door of a hairdressing salon, this board would catch your attention. Or maybe one of your friends or family members sees the message – and they know you want to be a hairdresser. So, they tell you about it.

Better still, it could point people to a large poster or banner on the salon door or window which set out what apprentices get – the benefits of having a job there.

Give people the strongest possible reasons to take action and enquire.

Nevertheless, at least this hairdresser is trying to get attention. Trying something. Testing a message (or two). Trying to give people a reason to enter the salon. It’s better than nothing at all.

Some boards simply say “Open for Breakfast”. Well, any cafe could say that. If it added “Full English for £5.95” or “Made The Way YOU Want It” or “2nd coffee FREE” it would be more enticing.