Think BEFORE You Rabbit
Board Wars 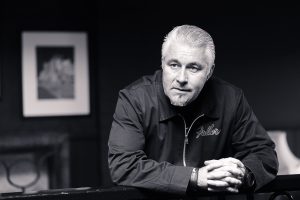 Terry Bradley has defied the odds.

No qualifications. No art college. No art degree.

So how did Terry Bradley – a leading contemporary Irish artist – achieve success? And what lessons can his rise teach us about business?

First, we have to step back in time. To the very beginning.

Terry Bradley was born in Belfast, the capital of Northern Ireland, in 1965. He spent much of his early life growing up just off the infamous Shankhill Road during a fierce political conflict known as ‘The Troubles’.

As a child Terry found some escape through reading Herge’s Adventures of Tin Tin, listening to pirate station Radio Luxembourg and drawing.

Thus the seeds of a future career were sown. A child with time to himself. Time to get wrapped up in a world of highly visual comic-strip adventures, musical rebellion and his own imagination.

Lesson 1: how often does a person’s childhood shape their future career or business achievements?

Instead, he set up a full lead mouth blown crystal factory with his two brothers. At first it flourished. But the venture wasn’t to last. After four years the business was forced to close its doors.

Lesson 2: If you spot a gap in the market, go for it. Learn from your business experiences – the successes and the failures.

Next for Terry he set up a clothes shop called Retro in a trendy university area of Belfast. It fast became a leader in fashion for the capital’s most clothes conscious consumers. It was the first shop to stock Red or Dead shoes.

Lesson 3: If you are the first to do something in your trade, field or industry you gain an advantage over other competitors – even if they try to emulate or imitate you.

Terry even had a regular Saturday DJ playing in the tiny outlet. He sold hand painted jeans and one-off shirts and jackets, specially imported from all over the world. But running a clothes shop was not his future.

Lesson 4: Offer something unique or different people want and you are likely to have a winner.

Lesson 5: If you’re not enjoying what you are doing, ask yourself if it’s time to try something new and head in a different direction.

Fed up with selling fashion, Terry Bradley headed for Dublin – a move which would change his life forever.

Lesson 6: Sometimes you make your own luck.

In Dublin, Terry worked as a model and also did some drawing in his spare time.

It was a chance meeting with John Reynolds, owner of the famous POD Club in the city, which resulted in Terry’s first solo art exhibition.

Lesson 7: Sometimes others can see in you more than you can yourself. Other people can help your career or business. Be open to offers.

Terry Bradley’s first solo art exhibition was a huge hit. He sold every piece of art in the room.

Lesson 8: People can only buy your product or service if they know it exists. That’s where word of mouth and marketing comes in.

More art followed. The confidence grew. The money started to flow in like a resurgent tide. Terry’s art is now sold all over the world. Highly collectible.

Exhibitions have been held in Dublin, London, Spain and the USA. Yet Terry has never forgotten his home. He’s had a show in his native Belfast and is about to hold only his second ever exhibition in Northern Ireland, at the Crosshill Gallery in Omagh on 17th June.

Lesson 10: If you have something scarce which people love, you can charge higher prices. It’s worth whatever people are willing to pay for it.

Terry Bradley’s art is influenced by time spent in and around the bars and nightclubs of Dublin and Paris. 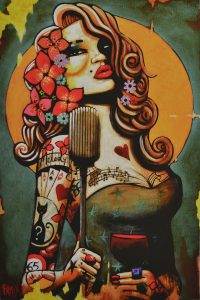 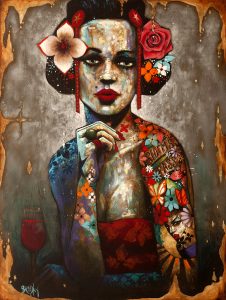 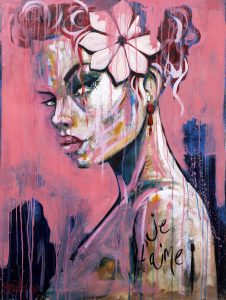 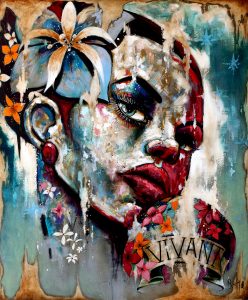 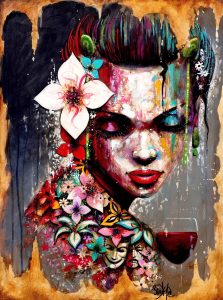 Many of his paintings share the theme of strong women: influenced by the people he met in and around the bars.

No surprise then to see celebrities among his admirers. But Terry Bradley’s work appeals to a much broader range of people than that.

He has a niche following in the world of tattoos and ink… a common feature on the subjects of his evocative portraits.

There’s something about his paintings which not only catch your eye but also draw you in with their intensity, colour and emotional depth.

Even if the subject matter is not your cup of tea these images still grab the attention and entice you into a second glance, a third and more again.

Naturally Terry Bradley originals are snapped up pretty quickly these days. And they can sell for many thousands.

Which is why the option to buy a limited edition print is taken up by fans who love his work yet could not seem themselves affording an original. Some people choose another alternative… having Terry Bradley artwork tattooed on a part of their body.

Lesson 13: Offer products or services at different price points and you appeal to a wider range of consumers.

Lesson 14: Think of different ways you can get your brand noticed.

Lesson 15: What partnerships and joint ventures can you make happen? For an artist one obvious route is to be featured and sold in art galleries.

What other lessons from art do you see for business?