A Postcard from Folkestone 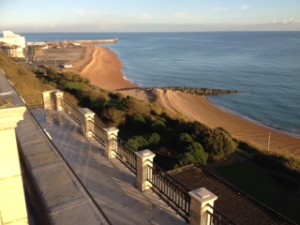 Welcome to Folkestone. My home town.

As you can see, it’s on the coast. An English harbour town and seaside resort in south east Kent. One of the closest points in the country to neighbouring France.

I grew up in this part of Kent during the 1970s. First in Hythe, then Folkestone.

Some 40 years on, I was curious to know what the town is like now. What has changed? What has stayed the same? What’s worse? What’s better?

But first, a brief introduction.

Folkestone is a port town with a small harbour and population of around 53,000. In the Victorian era it was one of the fashionable seaside resorts to visit and be seen in, with The Leas promenade one of the star attractions.

With its strategic location on the coast, the town has numerous historical connections with wars and military action over the centuries.

Folkestone was a training centre and main embarkation point for troops preparing to do battle in the World War One trenches. It also took in more than 60,000 Belgian refugees who fled the conflict. A topic which stays with us today, only with different countries involved.

During the Second World War, Folkestone took a pounding. German bombers occasionally dumped their loads short of London but also understood the importance of airfields dotted around Kent. There’s a Battle of Britain museum in nearby Hawkinge, which I must go and see one day.

The place definitely has history. If you’re interested in that there are plenty of resources for you to research and browse to satisfy your curiosity.

So what difference do I see in 40 years?

On the surface, Folkestone has changed very little. The population is not much different and the general shape of the town remains much as it was back in the 70s. The shingle beaches, the old harbour, the seafront, The Leas promenade overlooking them all, the town centre and the sprawling housing north, east and west.

I’ve never regarded Folkestone as a beautiful town yet it has some attractive features. The photograph you see is taken from outside the Leas Cliff Hall at the top of The Leas, a wonderfully long stretch of promenade with excellent views of the coast and (on a clear day) across to France.

It may have lost some beauty and elegance since the Victorian days, but The Leas is still a wonderful place to walk. On a crisp winter’s day with the sun lower in the sky it’s very pleasant and the views are good. The air bites mildly at the skin and reminds you that you are alive.

From this viewpoint, the photo sums up Folkestone and how it has changed over the decades. There’s not much to it. I know some say you should love your home town but it’s never won me over.

Let me take you on a quick tour.

As a kid, the seafront offered amusements in The Rotunda, a small roller coaster ride, a boating lake (I can smell the fuel from the wooden boats in my mind right now) and a busy crazy golf course which I loved going around. All that has long gone.

The Burstin hotel is still going (the white building in the top left corner of the photo) and so is the Leas lift, a steep water-powered funicular open during the summer months. The Leas Cliff Hall is still going strong. I remember seeing the likes of Slade, Jools Holland and comedian Bob Monkhouse there – and covering a local election count as a reporter for the weekly Folkestone Herald paper.

I used to deliver newspapers to flats and hotels along the Leas, and to offices in town centre precinct. Seven days a week. A giant satchel bag of papers every round. Delivering in all weathers. Wages £3.50 per week (rising to £4.00 a few months before I gave it up).

The town has changed a bit but looks like a centre in decline. Debenhams is the veteran department store, in need of a spruce up to its frontage (like so many of the shops here). The WH Smiths is still there but now also home to the Post Office counter service after the original building was closed for everything but collections. Many empty units. Everywhere looking a bit scruffy, like a rough-stubbled face in need of a fresh shave.

Yes, there’s a ‘new’ small shopping development which offers a hint of modernism but the flagship store is Primark so that says something about the ambition (or lack of ambition) for the area.

Talking of which, the old newspaper I used to work for is no longer in The Bayle. In my day there were probably seven, eight or even nine reporters working hard on news, features and campaigns for the local community. Now the paper is probably put together by just one or two journalists. It’s no different to anywhere else in the country. And it shows in the quantity and quality of the news.

Today’s reader will know less about what’s happening in their town and surroundings because TV and radio don’t have time for detail – and local papers don’t have the resources to dig out the real news anymore. Bland. Bland. Bland.

At peak times in the late 80s and early 90s, the Folkestone Herald would be 80-plus pages and the free South Kent Citizen 32 pages or more. Compare that to the local papers you get these days.

Meeting up with former colleagues recently, we all agreed those were great days for local newspaper journalism. Specialist reporters. Stories that had the national press clamouring for our copy. Investigations. Campaigns. Overseas assignments. Pressing politicians. Calling councils to account. Stories written with care. Pages designed with flair. Headlines that grabbed the attention.

The British Lion pub behind the Bayle is still going. This was our home most Wednesday lunchtimes after we’d finished writing the paper. I remember the pub used to serve a Ploughman’s with the biggest wedge of cheddar cheese you’ve ever seen. It still seems popular for food today.

Back in the centre, it’s clear that much of it has gone downhill. And it’s down the hill where there are glimmers of hope.

Welcome to the Cultural Quarter.

Walking down the pedestrianised section of Sandgate Road is a bit sad. The faded Debenhams, the watered-down WH Smiths, a grotty Costa, and few shops that look inviting. On the corner of Guildhall Street there used to be a Burtons on one side, Hepworth’s on the other (where I did a Saturday job as a 16-year-old). Burtons is now home to Bon Marche, the menswear shop empty.

Down towards Grace Hill there are signs of improvement, an independent shop or two plus a couple of reasonable-looking cafes and eateries. And then you hit The Old High Street.

This used to be a mish-mash of shops. A shabby yet wonderful old street, steep and laden with cobbles. Today it’s sporting a bit of colourful facelift. There’s a genuine sense of theme running up and down both sides of this narrow street. Arts and crafts, cafes and eateries, occasional events. Something a bit different. Something that stands out from the overwhelming blandness of the precinct above. Something that might just attract shoppers and visitors from neighbouring towns and beyond.

And at the bottom, cheap and cheerful Tontine Street now home to an arts and entertainment venue, the Quarterhouse.

There really is the germ of something here. Something Folkestone can build on. It’s a town that appears to have spent 10 rounds in the ring with Mike Tyson, had half an ear bitten off and not quite thrown in the towel.

But it does have its attractions.

I used to love wandering around the old harbour as a child. When the tide was in the fishing boats would bob and down gently in the sheltered water. When the tide was out, the vessels would sit in the sand, often leaning to one side. There was a cabin-style cafe by the water where my dad used to take me and my two brothers for refreshments. Then, underneath the arches, the strong smell of fish where the market traders had been selling the latest catch.

Today there’s a new addition, the Rock Salt restaurant. Reading the reviews it seems to divide opinion but the time I went there a few years’ ago I liked it. Great food, good service, fair price. The views across the old harbour are lovely.

It’s a quality item that adds something to the flavour of Folkestone. And that can only be a good thing.

That’s pretty much how one could sum up the town. Not much to shout about on the surface. Some little gems if you look hard enough.