A Postcard from Folkestone
Harold Fry and the Unlikely Pilgrimage 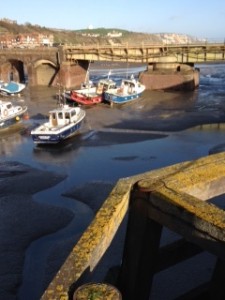 Vision is a word thrown about a fair bit these days.

Not talking about eyesight as much here as that long view picture of life and business.

In corporate speak it can come across as a bit pompous, jargon-filled and artificial. Without much sense of depth to it. Meaningless rather than meaningful.

Vision, when thought out properly, can make a difference.

You see it at work in successful schools.

You see it at work in successful organisations.

You see it at work in successful individuals.

The vision might start out small and narrow. Or it may be big from the beginning.

Either way, it provides a direction of travel.

This is how this school wants to be like.

This is how I want my organisation to operate and run.

This is what I want my life and work to be like.

When you know what you are looking for you can work back and trace the steps required to get there.

This picture illustrates a tale of what can happen when there is no vision. Or a lack of it.

The railway bridge you see stretching across the old harbour used to carry trains on the Orient Express. No more.

If you walked to the right of where this photo was taken, you’d come to the old ferry terminal. The ferries are no more.

Wander a little further and you would come to a stone-filled beach with a dilapidated building (which used to be a nightclub) and the old foundations for an amusements centre, rides and boating pool. All no more.

The only constant. The only thing remaining after 40 years or more is the old harbour, the incoming and outgoing tide, a few boats tied to their moorings.

Harder to promote your seaside resort when the attractions dwindle. Difficult to call yourself a port when no ships sail in or out any longer.

And yet there is a glimmer of hope here.

Take a close look at the photograph. In the far distance, up on the green hill you may be able to pick out a round white building. A martello tower. Built as part of the coastal defences against attack by Napoleon.

On the grassy slopes around the tower there used to be a small pitch and putt golf course which I played with my dad and brothers as a child. It is still there today, largely a summer attraction.

The area hosting the tower is called East Cliff. In the photo it looks far away. On the ground, you could walk from the old harbour up there – past the fish market, along the promenade by the sandy beach and up the steps.

The East Cliff also had a bowling green and tennis courts. Then there were the views across the Channel. And the coastal paths.

All different parts. All connected.

Go back to the photograph. If you walked left instead of right (and assuming you did not fall into the old harbour) you would come to the Old High Street (now more alive than ever with independent shops, art shops with galleries, creatives and at least one cafe) and Tontine Street (now home to an arts and entertainment centre).

You are now in the town’s cultural quarter.

And this could be the spark for more local regeneration.

If the vision was broader.

If the vision was bigger.

If the vision was brighter.

This is a town struggling to compete on the retail front with is neighbours. It needs a different offering. More independent shops. Shops not found anywhere else in the county.

This is a town which needs vision.

A plan for attracting people.

A plan for attracting new investment.

A plan for giving many parts of the centre a makeover.

A plan for promoting and selling itself.

A plan for working with its Cinque Port neighbours along the coast and its neighbours across the Channel.

Give people a reason why they should visit.

Give people a reason why they should spend their money here.

Give people a reason to return.

Do the people in power have the vision?

Do they have the ideas?

Do they have the courage?

Do they have the creativity?

Do they have the know-how?

Do they have the drive and determination to make things happen?

I’m not convinced. I hope so.

The alternative is a local economy washed away with the tide. A town in terminal decline.

The place deserves better than this.

But nobody owes it any favours. It’s time for the town to stand up and be counted.