When the coffee experience goes flat

Brian, Dave And Those Bloomin’ Meerkats
What They Teach You at Harvard Business Review 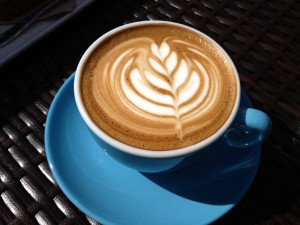 How are you with coffee and cafes?

Are you a creature of habit or do you like to try different experiences when out for a caffeine-boosting cup?

I only ask because I’m struggling to attach loyalty to any one particular establishment in my home city.

I’ve pretty much tried them all, chain and independent variety. There’s no clear winner. Not a cafe I can pin my colours on and say that’s the one for me.

Let’s get a couple of the obvious contenders out of the way first.

Starbucks is off the list. In the past eight years I think I’ve used it twice (and only because they offered free wi-fi when my connection at home went down) and its’ nothing special in my eyes.

Costa used to be my haunt of choice but my enthusiasm for it has waned and I can’t quite put my finger on why. I still use it on occasions at motorway service stations up and down the country.

There are plenty of other options in Chester. Tea shops and cafes in good supply. So what makes the difference? I won’t go through the whole list of places to go.

The Barista’s in Watergate Street is quite good and friendly and I hope it survives as a new big-chain name has opened up directly opposite in the past year or so.

Cinderbox in Bridge Street has a good atmosphere but blotted its copybook on a recent visit. The cafe was very busy but the service was very slow. I waited patiently. It felt like it took 10 minutes or maybe more to get a simple coffee and cake to me. At least one other table was served their drinks before me and that’s not right. In a large, faceless place you can get away with that. In a small cafe things like that get noticed.

In the same street, I thought the winner had been found – The Jaunty Goat. When I first visited they delivered a flawless flat white. One of the best I’ve tasted outside Australia and its original homeland, New Zealand, in fact. Welcoming service, good food, a small but quirky seating area and wi-fi.

The cafe closed suddenly but has since reopened in larger premises just a few doors down from where it used to be. I still like the atmosphere there. The service remains friendly and efficient. But I’ve been put off from going again since my last visit.

Just one reason for that. The flat white that time was very poor. In fact, I wouldn’t even describe it as a flat white. More like a milky coffee. No texture to it at all. It might have been a one-off. Maybe the guy who made it was new (I hadn’t seem him before). Either way, I felt “let down”. I should go back soon and give it another try. If the flat white is right next time it will reassure. If it’s not, I’ll assume the place has lost its winning ways.

Which leaves me with the place I now go most often. Not an independent. It’s Caffe Nero. There are three of them in Chester but I particularly like the one at the bottom of Bridge Street. Great location. Large windows so you can watch the world go by. Small but cosy. I like the coffee. I like the food. Most of all the staff make you feel welcome every visit. Not forgetting the  loyalty card which, when stamped, gives you a free cuppa for every 10 you drink there.

I know other places do good coffee. I know they do good food. I know they may also have a loyalty card. But when you see staff make a real effort to make your stay an enjoyable one that’s something that stands out for me. Is it the same for you?

And here’s another example of the difference. I tried the bigger city centre Caffe Nero one Saturday around the middle of the day and it was very busy. The queue at the counter almost went back to the door. I almost turned round and walked straight out, thinking it might take ages to get served or there might be a struggle to find a seat. But I chose to give it a go.

What I noticed was the difference between that experience at Cinderbox (having to wait 10 minutes for a plain coffee) and the experience here. The queue at Nero’s was bigger. They may also have had one more person behind the counter than Cinderbox. But guess what?

I got served in about five minutes. How was this possible? Did they have a magic wand at Caffe Nero’s? No. They had something more important. Team work. These were staff members who were organised, knew what tasks they had to do and used a system to manage the busy times.

Staff didn’t wait until you neared the till to ask for your order. They went down the line and got the drinks orders in first, so they could line those up and keep the orders flowing. They set out trays so they could prepare four or five orders in one go. Every order was delivered correctly. It was very impressive. They didn’t panic. They didn’t say “Sorry, we’re busy”. They just got on with it and provided an efficient and friendly service.

The other cafe could learn from that. If they’d had a proper system they could have dealt with orders better and not get orders out of sequence. I wasn’t the only customer left waiting, wondering at what point to ask “How long will it be?”.

Why am I going on about this? Because there’s an important point about business here. The cafe industry is highly competitive. It can take a while to get a cafe up and running so it’s profitable. It doesn’t take much to shut it down.

It might be the same in your line of business. Your trade or industry. It’s not just about the product. More and more people are looking for quality and something extra in the service. Something that makes them choose you rather than a rival.

If someone spent £50 a week in a cafe and then stopped going, spending their money in a competitor’s cafe instead that’s £50 quid lost every week. If 10 people chose to do the same that becomes £500 a week. It soon starts to add up, doesn’t it?

And it’s not just the cafes. It’s the shops which face a similar challenge.

Deliver a poor product, service or experience and you’re likely to lose customers. Get it right, go the extra mile and show people you value their business and you can push ahead of the competition.

Now, where’s that next coffee going to be?