Volkswagen – A Story of Pilchards and Lemons 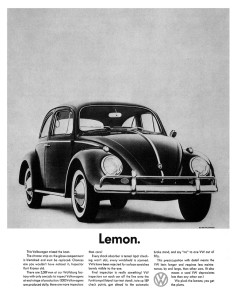 The Volkswagen diesel emissions scandal is one of the most powerful stories about how reputations (and fortunes) can be easily won and lost.

More than 60 years ago, VW took the USA by storm with its charismatic Beetle. It was marketed as a small, reliable and fun antidote to all those huge gas-guzzlers in the States.

The advertising campaign which opened the floodgates included the advert displayed with this blog. It is one of the most famous adverts of all time. It’s also one of the most brilliant.

A single, large image of the car on a white background. Underneath just a one-word headline – Lemon.

The angle was that the car pictured would not be going to the States. The chrome strip on the glove compartment had a blemish and needed to be replaced. That was how thorough the inspection process was. In other words, you could trust a Beetle if it made its way to a US car showroom.

The copy provides specific details to back up the claim… 3,389 men at the company’s Wolfsburg factory had just one job to do – inspection; inspections were made at “each stage” of production; every shock absorber is tested (“spot checks won’t do”, says the ad); every windshield is scanned.

Inspection is so tough that “VW’s have been rejected for surface scratches barely visible to the eye.” Every vehicle goes through 189 check points. Most tellingly, one Volkswagen out of every fifty doesn’t make it through first time.

The benefits to the car buyer? Volkswagen said the attention to detail meant their cars lasted longer, required less maintenance and depreciated less than other cars.

The Beetle in the picture was one of the fifty. It was a “lemon” (i.e. a failure).

Sales of the car in the US were strong in the 1950s and kept on rising to a peak in the 1970s. The Beetle was a best-seller. VW a brand built on a reputation for reliability.

Turn the clock forward to today and the picture is very different.

The US regulator, the Environmental Protection Agency (EPA), discovered that the German carmaker had installed software in diesel vehicles to make emissions appear cleaner than they actually were. The so-called “defeat device” is able to “tell” the car that is in laboratory test mode and as a result change the engine settings

The lab readings showed a clean pass. Yet when the cars were tested under road conditions, the emissions were up to 40 times worse than under indoor testing. Forty times above the permitted standard.

Millions of VW drivers across the world may now be motoring in vehicles they thought were “green” but which are actually environmentally damaging. Some will stay loyal to the brand. Others may seek compensation for being mis-sold a car which could be viewed as an environmental “lemon”.

As for the people at Volkswagen who were involved in the deception. And the people running the company (whether they knew about it or not). There’s one word to describe them…

Did they really think they would EVER get away with this? At some point, they were always going to be found out.

The full scale of the damage to the company cannot be assessed right now. Much depends on how VW responds, what shareholders believe, what the customers think and how much legal action follows.

What we do know already is this.

More than ONE THIRD was wiped off the value of VW Group (which includes Audi, SEAT and Skoda).

The recall of millions of vehicles plus fines could cost the carmaker more than £11.5 billion.

The company is likely to face legal action and compensation claims, particularly from the US.

The lab test-cheating scandal may not destroy the company. It has left the new boss and his team with a huge job at restoring faith and trust in Volkswagen. Words will not be enough. People will be looking for action.

Those found responsible for “okaying”, installing and keeping the cheating a secret should be sacked. Those in management (who either knew about it or were ignorant of it) also deserve penalties. This happened on their watch.

Seeing how Volkswagen markets itself out of this mess is going to be fascinating.