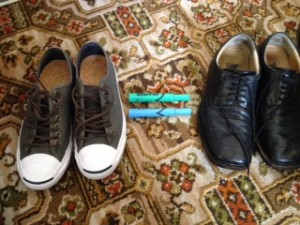 TOMS is the name of the global company approaching it’s 10th anniversary.

It’s got nothing to do with a guy named Tom.

No, this TOMS is led by the entrepreneur Blake Mycoskie.

I was struck by what he wrote in an article for the Harvard Business Review recently.

If you’ve not heard of TOMS, it’s a company which stands for helping someone else in the world EVERY time you buy from them.

Blake came up with the concept whilst on “something like a sabbatical” in 2006. He went to learn to play polo in Argentina. Whilst out there, he came across a non-profit project which delivered shoes t children in poor rural areas.

This moved Blake so much it got him thinking.

The idea he came up with was a for-profit company based on buy-one, give-one. A customer buys a pair of shoes from his business, he gives a pair to the needy. The name TOMS stems from “Tomorrow’s Shoes”.

By the end of the launch day the company had sole 2,200 pairs of shoes (TEN times the number Blake had anticipated, based on the stock he had set aside). Within six months that figure had risen to 10,000 pairs.

Rapid year-on-year growth created a global company which by 2012 was seeing more than $300 million in revenue.

A success by anyone’s standards. Yet Blake did not feel overjoyed. Just the opposite. He described himself as “disillusioned”.

His company had grown fast. It now had a team of executives handling the day-today running of the business. Blake felt his days were dull. He felt disconnected from the company.

The CEO took a “sabbatical” as part of his move away from L.A. to Texas.

And this is where he found time and space to think.

Blake realised the company had drifted away from its original purpose, it’s original “why” (why are we doing it?).

Of course, a business is there to make profit. But this was not a company set up so it could give discounts or offer deals as incentives to buy. This was about using business to directly support a child in need in return.

With this revelation came an opportunity. A meeting with a guy supporting the coffee-growing trade in Rwanda prompted a new venture… into coffee!

This was not about competing against other coffee brands. This was back to the original purpose.

So, for each bag of coffee bought, the company would provide a week’s worth of water to a person in need.

Blake describes it as a movement as much as it’s a company. He says the radical new product venture – into coffee – has encouraged the firm – and everyone in it – to think bigger and be more prepared to challenge the status quo.

He told the Harvard Business Review: “… I feel more energised and committed than ever… The “why” of TOMS – using business to improve lives – is bigger than myself, the shoes we sell, or any future products we may launch.”

I love the principles behind this business model.

I love the fact this boss was able to step back, take stock, reflect and reconnect with a company he was falling out of love with. A company he founded. His “baby”.

I love how making money is NOT the ultimate aim. Sure, the money’s important (it keeps him and his loved ones in the lifestyle they’re accustomed to) but there’s a bigger driver behind the operation.

What lessons are there for your business here?