One for the Vine 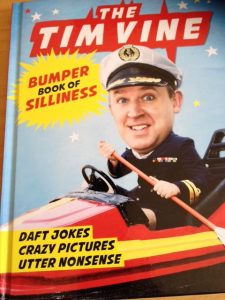 An English writer, actor, comedian and presenter best known for his rapid-fire puns.

If you enjoy that kind of word play (which I do) it’s very funny.

It tickles you. It makes you let out a laugh even if part of you just thinks for a moment “That’s silly”. Some puns catch you by surprise – and induce both a smile and a gentle nod of appreciation. Others can leave you rolling in your seat, fearing you will split your sides.

Comedy can do that to you.

It’s a wonderful feeling when it happens.

Puns may seem silly. Stand-up comedy may appear spontaneous, as if each story or gag is just made up in the moment on stage.

But there is more to it than that.

Puns play on words and language.

The master of the art…

Requires an interest in everyday phrases and sayings.

Requires the ability to make associations with one thing and another to trigger an emotional response in the audience.

A Record Breaker – And That’s No Joke!

Tim Vine is one of the world’s best exponents of the pun. In 2004 he entered the Guinness Book of World Records. In just one hour he delivered 499 jokes – beating the previous record of 362 by a mile.

Incidentally, his achievement inspired another comedian, Australia’s Taylor Goodwin to go 51 better a decade later. An incredible 550 in the hour.

But have you noticed the point I was making?

Comedians can teach us a thing or two about marketing, copywriting and advertising.

Think about it for a minute.

A comedian gets creative to come up with jokes, stories and puns.

A comedian develops a persona, a style, a character, a brand.

Tim Vine is THE pun master. (There are others who do puns but not the way Mr Vine does them).

Don’t Laugh – You Can Learn From Comedy

A comedian studies people and situations to explore what is or might be funny. What makes them laugh. What may make others laugh, too.

A comedian does their research and gathers material for their routine or set – whether a five-minute open-mic spot or a two-hour show at the O2 in London.

A comedian has a strategy and knows what they are going to say before going on stage. Some even write their whole performance in advance and simply learn the ‘script’ by heart – like an actor learning their lines – before hitting the spotlight.

A comedian tests their material at smaller ‘preview’ gigs before taking it out on the BIG nationwide or international tour.

And at the heart of their livelihood?

The Words Are What Determines Failure Or Success…

What is said. How it is said. Timing. Pace. Pauses. Presentation. Delivery.

All the things for…

When you break it down.

It all comes down to words.

They can make ALL the difference.

Words (when delivered or presented in the right way) can capture and hold people’s attention.

Words are designed for an audience or market – but may reach a wider community.

Words matter. Any old word will do is the route to poorer outcomes – including complete failure.

Words deserve to be presented well.

Words should be given proper thought, not just thrown in as a hit and hope.

Words can sound artificial or phoney. Words can appear as if you’re part of a genuine conversation.

Words can be hard or soft. Poetic or literal. Dull or descriptive.

Comedians like Tim Vine understand the power of words and how they are presented.

Far too many businesses have not yet grasped their importance.

It’s why you see boring websites and different companies saying the same thing as the next.

It’s presumably why some people take the fast food route and go for cheap over quality.

It’s possibly why others rely on templates or a formula to get by.

Or maybe they simply haven’t seen the evidence, the research, the results of real-world testing of words used in marketing, promotions and advertising.

Words DO Make a Difference…

They can make people want to visit for longer on your website and explore more pages.

They can encourage people to sign up for your newsletter or free report.

They can create so many telephone enquiries you’ll half think about turning off the system… before you realise the smart thing to do is take on more people to man the phones.

Words are there to be crafted and set down for maximum effect.

Use them. Test them. Be dazzled by the difference.

And laugh yourself all the way to the bank.

P.S. By the way, Tim Vine is twice a winner of the Best Joke Award at the prestigious Edinburgh Fringe Festival. Want to hear his two gems?

OK, here they are for you…

“I’ve just been on a once-in-a-lifetime holiday. I’ll tell you what, never again”

And the other Vine effort was: “I decided to sell my Hoover … well it was just collecting dust.”

He works at his words… and it shows.

You laughed, didn’t you?