One for the Vine
A Rye Smile 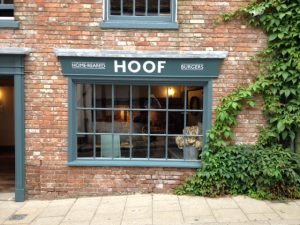 If you keep your eyes open when out and about you notice things like this.

Things which can offer lessons for business. Lessons for marketing.

The sign caught my attention first. The word in bold white letters… HOOF. Followed by the word burgers.

Surely not? I was about to be outraged. I mean, how could they? Especially in such a relatively affluent county.

It’s one thing to say “I’m so hungry I could eat a horse”. It’s entirely another to carry out the deed.

Closer inspection of the building allayed any fears.

The burgers her were pure beef. In fact, this restaurant had only recently opened. It’s run by a local farmer.

Certainly a powerful way to demonstrate the quality of your produce and reassure customers about provenance.

It won’t take much to remember the name, Hoof.

And when you say the word it reminds you there is more than one definition. It’s not just a part of a horse’s foot.

As a verb, it can mean to go on foot. Usually at faster than average speed. As in “I only had 20 minutes before the train left the platform so I hoofed it to the station.”

It can also mean to kick an object (usually a ball) powerfully. As in football. “The defender hoofed the ball up field in the hope the lone striker would latch onto it”

When said like that, the word has a wonderfully onomatopoeic quality to it.

It describes the action so well.

The Hoof – A Tactic for All Seasons

It also made me think of football and that strategy of hoofing the ball up field.

You tend to see it in every Sunday football match along the length and breadth of the country.

You tend to notice it in most lower league matches.

You tend to observe it less and less the higher the league the game is in. Yes, it can still be seen in the Premier League. But fewer teams are playing that way – or using it as their number one strategy.

And in the international tournaments it’s rarer yet.

Now, don’t get me wrong.

There’s nothing wrong with a good hoof.

Even if you’re not a sports or football fan, bear with me. There’s an analogy on the horizon for your business. Your marketing.

Sunday football is largely the preserve of amateurs. People who work during the week, enjoy themselves on a Friday or Saturday night and enjoy a runabout and a kick about on the Sunday for their league side.

At this level, there is usually more puff than precision (especially if the players enjoyed their Saturday a little too much the night before).

People are usually not at their fittest, however sporty they may be. They can play rudimental football but most will not be exceptionally skilful at the game. It might not even be the same bunch of players they play with week in, week out.

So at this level…

A long-ball strategy can work well. The big old HOOF!

The defence will tend to leave gaps. It may push up the field and leave space behind. Communication between players may be lacking.

So a well-targeted hoof can help the attacking side catch its opponents out and give one of its strikers a chance on goal.

Moving up into the lower professional leagues the story is not much different. The players may be fitter. They may be faster. They may have a more organised defence (particularly as they have a coach or manager to tell them what to do).

But, in the UK at least, it’s still seen largely as a very physical, aggressive “don’t give people time on the ball” approach. Which still leads to a lot of long balls and the good old hoof.

Sure, you still see the long ball (or hoof) used. But not nearly as much. Some teams almost never resort to this tactic.

Because this is a different level altogether.

This is a league which contains some of the world’s best players. Many from Europe and further overseas – countries where people grow up and develop more skill on the ball.

This is a league which has some of the fittest sports people in it.

This is a league where managers, coaches and technology work together on strategies, tactics and organising their players into a well-drilled team.

When you have all that in place…

The long ball is often just a hit and hope. A last resort. An admission that everything else you’ve tried in the match so far has failed.

A good defence will cope with the almighty hoof ball 99 times out of a hundred. There’s rarely any surprise with it. It hangs in the air a long time. Enough time for fit and agile defenders to move to nullify the threat.

The hoof, the long ball can work. It put England out of the 2014 World Cup, for example. A defensive error allowed an ordinary long ball to turn into a goal-scoring opportunity.

But if the ONLY thing you have to offer is a long ball or a hoof… you are playing on a wing and a prayer. It rarely succeeds.

So, here’s that analogy I said we’d be making.

It’s no different in business or marketing…

If you just use one strategy you are less likely to succeed.

If you’re going to hoof it, you need to add a twist or element of surprise to it. Otherwise it will not get past the defences of prospects who are hearing a similar message from all those others who say they offer what you do.

If you do not have a strategy, the tactic of hoofing it is unlikely to work. You have to know when to hoof it. And when not.

For example, if the only marketing you do is through Facebook and nothing else… you may get some success but you will almost certainly be leaving money on the table and missing some deals.

It’s not enough to learn the technical “how to” of marketing. If the words are not right it doesn’t matter how pretty or fancy your website is, how slick your software package is or how many thousands you’ve invested in it.

If the words are not right – it can all fail. And it does. There are businesses out there who have spent two or three years using Facebook and Google ads and not made a penny from it.

Why do they continue with it? Search me.

Maybe they think that’s all there is to it, like in the movie ‘Field of Dream’s… “Build it and they will come” (only they probably won’t).

Maybe they have been told by a so-called marketing expert or guru that Social Media is the only thing in town.

Maybe they do not monitor their results or have failed to include any analytics in their set-up.

Maybe they have so much money to waste they don’t care.

One day it will all work out.

Only if the words are right.

For that, you’ve either got to do it yourself and know you’re good at it – or hire a copywriter to do it for you.

Or you could invest in someone who understands something about marketing words that cheap copywriters do not.

Let me know if you want to know what that is.