King is copy, Copy is king

Where do yours hang out?
The Fickle Buyer (A Walk on the Whernside) 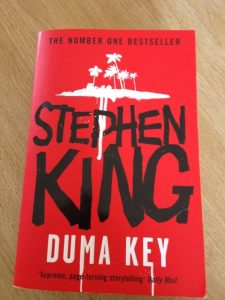 … is known as the master of horror.

But there is far more to this multi-million bookselling author than a bit of blood and a few bumps in the night.

Stephen King is a master storyteller.

And not all of his novels have the intense ferocity, shock and terror value of tales like Carrie, Cujo, Christine or The Shining.

I discovered the book in a charity shop. The cover didn’t do much for me but the blurb on the back got me curious enough to buy it.

And it was one of those novels where I started reading a few chapters, put it down, returned to it a week later and found I could’t get back into the story without going back to the start again.

I’m glad I persevered. It’s a terrific story, wonderfully descriptive and it just draws you in. An absolute page turner.

It also offers us some valuable lessons about copy and marketing. Here are just three:-

Lesson #1 – The Question of Long Copy

This is a topic I’ve talked about (okay, okay, ranted about) a number of times now. And for good reason.

Because I still hear this argument, belief or opinion from clients that “Nobody reads long copy any more” or “It has to be short. People won’t read it, otherwise”.

I heard it again from a website client last week. They, and anyone else who spouts this nonsense, is simply wrong. (And, yes, I did share this point of view with my client – otherwise I would have been doing them a disservice).

And, yes, there are times when short copy is more appropriate. And times when longer copy is the order of the day. Knowing when to use which is part of the art of copywriting and marketing.

And if you don’t believe me, just consider Stephen King for a moment.

If people don’t want to read long copy, why are people buying his books? I gave Duma Key back to the charity shop but from rough memory it ran to more than 600 pages. His latest paperback is 711 pages long.

Some may argue people are buying because King is famous, already a bestseller. People will buy “anything” with his name on. And there may be some truth to that. However, it doesn’t win the argument.

Because the author has never gone in for short books. One of his early creations, The Shining (later made into Kubrick’s film starring Jack Nicholson) was well over 400 pages in paperback. And that came out 40 odd years’ ago.

People will read as long as they are entertained, captivated, thrilled and immersed in the content.

And if you’re still not convinced, try selling a high-ticket item (say £1,000-plus) with only short copy. Good luck with that (unless you’re promoting the next Apple smartphone).

In the book Duma Key, the central character rents a property in Florida. He was not swayed by the bright pink folder the details came in. He was not persuaded by the name of the beach house, Salmon Point.

No, what caught his eye was the headline, embossed in gold on the cover of the folder. It simply said: “YOUR SECRET GULFSIDE RETREAT”.

The character needed to recouperate from an accident and wanted to have some time to himself. So the words really hit home for him. As the character says in the book, the property “called to him”.

Whatever you are marketing, the headline is usually the first thing people see. It’s the bit which decides whether they read on or not. So it’s worth giving it serious thought and attention.

Who is your audience? What is the conversation going on in their mind? What is your ‘hook’ or angle to make them interested to read more about what you have to offer?

Too often people make the mistake of just dashing out a headline and thinking that’s enough. Those who know better understand the choice of your first words are critical.

When reviewing, editing, or writing conversion copy I find it very easy to see where improvements can be made.

Most copy lacks thought, care or precision. It’s a bit like someone has decided to cut their own hair rather than get it styled at a professional salon. Saved a bit of time and money but the result is not the same. It might take a trip or two to an expert stylist to put things right again.

Stephen King would probably make a great copywriter. He understands how to use words and language. Just consider a couple of lovely examples from his novel Duma Key.

He could have described a storm as “fierce, blowing a gale”. Instead he paints a picture for your mind…

“The size of the actual storm when it arrived – the pelting rain, the freight-train shriek of the gale – frightened her badly, as if she had whistled for a dog and gotten a wolf.”

How dramatic and cliche-free is that?

And here’s a simpler line about a dinner some of the characters were having. King could have said the dessert was “sweet and delicious”. Instead he chose these words…

So simple. So elegantly crafted. So effective. (people who enjoy desserts will resonate with the words in parentheses – we’ve all had that feeling).

When language offers us so much richness, it is a shame when it’s not used with wisdom or care. How many times do you see websites, emails or pages riddled with cliches, littered with tired phrases, jammed with jaundiced jargon or giving out gobbledegook.

Simple words. Emotionally-enriched words. Words which create a picture in the mind.

That’s where the power lies for copy. (Just take a look at those two examples from Stephen King again… no long words, no technical words, no fancy words. Just words used and placed in a way which connects with our emotions.

Copy really is king. And King is a master of storytelling copy.

You can learn much by reading his books. (And if he’s not your cup of tea you can find an author who grabs you – chances are they’ll know how to write a cracking yarn, too).