All Greek
Booking.com talks my language 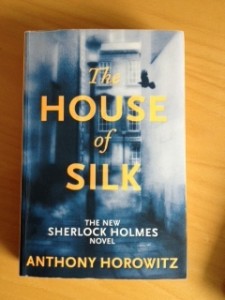 Sherlock Holmes has always been an enigmatic character and his popularity seems unlikely to wain.

If anything, the fictional detective at 221b Baker Street in London is enjoying a strong revival, thanks not least to the BBC television series with Benedict Cumberbatch in the title role.

Not just in television or through the old films of the detective’s cases. But also through new writing.

The picture you see is the front cover of a ‘new’ Sherlock Holmes novel, The House of Silk. Published in 2011, this story was written by Anthony Horowitz – the guy who created the TV series Midsomer Murders and Foyle’s War.

What Horowitz has attempted and (judging by critical reaction) succeeded in doing is to recreate the prose style of Conan Doyle. So it reads like an authentic Sherlock Holmes yarn.

Fans will, of course, lap it up. Another story to follow of their hero.

Mr Horowitz will be happy. He took a big reputational risk with this project and emerged with merit (plus a nice little earner). The publishers, Orion, will no doubt have done quite well with the book sales.

And the Conan Doyle Estate sees the continuation of the legend in print (as it has rights in connection with Sherlock Holmes and Sir Arthur Conan Doyle, it presumably gains as well).

So, from a business point of view there’s money to be made from Sherlock (just ask the visitors charged £15 to visit the Sherlock Holmes Museum in Baker Street… which is not even at 221b).

There are obvious marketing and advertising lessons which can be explored from the franchise.

However, more intriguing is to examine what Sherlock Holmes, the world’s greatest ‘consulting detective’, can teach us about marketing.

I think the old boy would have been rather good at it.

Just take his name, for example. Sherlock Holmes. In the novels, almost every character knows of his name. He is legendary. People are in awe of him and his deductive powers. People call him Mr Holmes and yet he can be identified with just his first name. Sherlock.

That’s no different to being a rock or pop star today. The number of singers and musicians who are known by just one name is larger than you might at first think… Adele, Madonna, Beyonce, Enya, Sting, Pavarotti, Eminem, Elvis, Prince, Cher, Pink, Bono, Rihanna, Seal, Morrissey, Dido, Moby and more.

Sherlock has pop star status. If he went on tour the gigs would be a sellout.

Sherlock is a power brand. A powerful brand. It has a large and loyal following.

And notice that the fictional genius understood the importance of positioning.

This sleuth was not just any old detective. He always introduced himself as a “consulting detective”. In an instant, he differentiates himself from the norm, from the standard, from the commonplace, from the average.

This is a specialist.

This is a detective the detectives turn to when they are stumped (as they often are, particularly in the form of the poor Inspector Lestrade, in Conan Doyle’s tales).

This is is someone who knows his business well.  He has knowledge. He has experience. He has skill. All wrapped up inside a supreme outer confidence. I say outer confidence because away from the public eye, perhaps when alone and raggedly playing his violin or in a drug-induced state, the seemingly all-seeing-all-knowing Holmes had his moments of doubt, stress, weakness or confounded stuckness.

Sherlock has a loyal band of followers, from Dr Watson to the scruffy boys known as the Irregulars.

Sherlock has strong positioning in the market (of detection work).

Sherlock understands his market – the murky world of crime and the criminal mind.

Sherlock knows his price. More importantly, he knows what VALUE he brings to his clients.

Sherlock does not chase work. The work comes to him.

Sherlock chooses which cases he will take on. He rejects others.

He has a target market.

Sherlock is a master of skills not only essential for detective work but which would also make him a superb marketer. He is a great listener. He is superbly observant of even the most minor or seemingly innocuous fine detail. He gets to the point. He deals in facts. He digs deep.

Above all, he puts his brilliantly sharp and creative mind to work on every case.

Sherlock is not the easiest person to be around but he knows the value of relationships, most obviously of course with Dr Watson. He also knows when to outsource (such as using his band of street urchins, known as the Irregulars, to do some detective work for him).

He does not view the Police as competition or rivals. He knows they have plenty of work coming in. He works separately from the force, knowing himself to be the superior agent, yet will also work with the likes of Lestrade when it suits (or the law demands).

Sherlock focuses on the outcome, the result.

Sherlock is the ultimate puzzle-solver, the stand-out solution finder.

Sherlock delivers consistently for his clients (yet is human enough to not have every case solved).

Excellent qualities for a marketing consultant or strategic copywriter.

And Sherlock Holmes is one of the world’s great thinkers. He thinks differently to the rest.

Some copywriters are lazy and not prepared to spend time thinking on behalf of their clients.

How many copywriters do you know who read every day, write every day and think with purpose every day?

All to make a bigger difference for their clients.

For fresh ideas. For content. For engagement. For copy. For campaigns. For funnels. For personalisation. For more leads. For more conversions. For more sales.

Wouldn’t that go down well in your business?