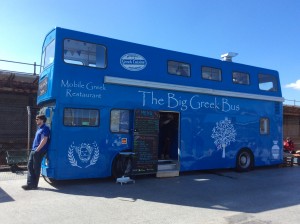 “It’s all Greek to me” is a phrase or saying you may have heard before.

It means there is something you do not understand.

It could be the offside rule in football. The scrum in rugby. American Football (everything about it!).

Now the photo you see is of ‘The Big Greek Bus’. I discovered the blue double-decker during a seafront walk in the sunshine.

What struck me first was what a great idea.

When we think of dining out the norm is to think of going to a restaurant or bistro. The customer goes to the place where they cook the food.

With the bus, the restaurant comes to you!

Not a unique concept but still rare enough to be different.

And once you do something outside of the norm It can open up a whole new range of ideas for the business.

If the bus is not connected to an existing Greek restaurant (or several restaurants) the bus guys could consider a joint venture. They serve their mobile menu, promote Greek Food and have information about Greek restaurants in the area.

This blue restaurant-on-wheels could turn up at events, locations inland and by the sea, food estivals, and so on.

It could potentially be hired for a group social, hen party, stag dinner, maybe even a corporate or business team day.

Perhaps you’ve already thought of some other ideas this business could use.

What did puzzle me was something which might puzzle you when you look more closely at the photograph.

There’s the bright blue bus. It is a head-turner (it’s a double decker and BLUE instead of the typical red) for sure.

But the side of the bus has something missing. A couple of things, in fact.

So, they’re missing a trick.

Now, I didn’t check the front or back of the bus. I didn’t explore inside. So there may be websites and numbers there.

The point is, the side of the bus is what I (and hundreds of other passers-by) saw.

A small detail but who knows how much future income this business will lose because they forgot one or two REALLY simple things.

It’s also one thing to have a menu board by the side of the door. I would have had a couple of ‘billboard’ stands at either end of the bus, telling people “We’re open – Come on inside” or “Step inside for a free taster”.

That would encourage more people not to just stand, gawp and maybe take a photo of it… but also to go in and have a look, see what’s on offer, grab some takeaway information, ask questions or try some of the food.

I’m sure these guys are really passionate about their food (and Greek food is definitely worth trying if you’ve never tried it before).

And they have got a sense of marketing. They’ll probably learn to do more as they go around and see what reaction they get.

Thinking about it, that’s not uncommon.

Entrepreneurs and business owners who are passionate about their products and services. Who know  these things inside out…

… and yet when it comes to the marketing they say:

They might do no marketing and just keep their fingers crossed.

They might do some marketing and get poor (or ZERO) results.

They might spend a LOT on marketing – and still not achieve the outcomes and return on investment they’re looking for.

They might (in desperation) turn to a so-called “guru” and buy a DVD program, online course or tickets to an event. Hoping and praying for salvation.

They might go from agency to agency, throwing money at the cause and not quite seeing that money come back (or if it does return – not the same amount and in more of a trickle than a torrent).

Which seems a bit strange to me. I mean, let’s look at it another way.

If your watch is not working – you go to a watch repair specialist.

If your computer is not working – you take it to a computer repair centre.

Because you’ll say “Computers – they’re all Greek to me”

If your boiler fails, you call a plumber or heating engineer. A specialist.

If your car sounds or feels wrong (or one of your electronic warning symbols lights up on your dashboard) – you take your car to a garage. One you trust.

And let’s be clear.

In every case you just want ONE thing…

You want the problem fixed.

So, following that logic.

If your marketing is not working – you take it to a marketing specialist. To get it fixed.