Red Ape on the Brink

Remembrance – Worth Remembering
Kate Bush on a Sound Track?

Red Apes Being Wiped Out… 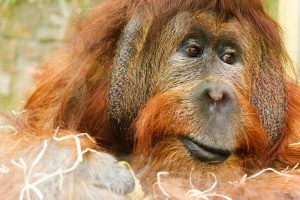 Take a look at this face. A good look.

Because within 10 years or less you may never get to see it again.

That’s how long the orang-utan has been given to live.

No, not this one in the picture… the entire species.

The threat of extinction is very real for these beautiful, gentle red apes.

They’re only found in the wild in Asia – more specifically Sumatra and Borneo.

It’s estimated there are fewer than 400,000 orangutans left in Indonesia and Malaysia combined… that’s a 34 per cent loss in just a decade.

Surprise, surprise. It’s us. Mankind (and note the irony of that word).

Sure, there are natural fires which can damage the forest environment these humble animals call home.

But the real damage is being done by illegal activities. One is poaching. The other is man-made fires which destroy the trees and leave the land open for exploitation to produce palm oil.

If you don’t know what palm production to our natural world around the globe you can Google it.

If you want to join in and help do something about it without too much fuss then make more careful choices when buying your next packet of crisps, pizza, noodles, toothpaste or shampoo, for example.

Better still, tell the big companies to stop using palm oil… and tell them you’re going to stop buying their products unless they change their ways.

If enough people make a stand, they will listen. They will have to listen. If people stop buying their products they lose money, lose profits. That’s not good for their business. It won’t please their shareholders.

Well, you may not realise that these giant red apes are special.

They are one of the closest relatives to us humans. We share 97 per cent of the same DNA.

They are born with the ability to reason and think.

They are the largest tree-living mammal in the world.

They are gentle giants. They do nobody any harm.

They are part of this planet. They form part of our ecosystem.

There is a reason why they are on this earth.

Yet big business does not seem to care. They seem happy to put profit before lives.

Let’s go through the numbers for you…

If we were talking about humans – adults and children – in those kind of numbers there would be worldwide outrage and condemnation.

Because we’re talking about animals not so many seem to care. Or maybe not enough people know about it yet.

The red apes are in far away places which many people could not even find on a map.

If it were happening on your doorstep you might see it differently.

And what’s happening to the orangutans is just one symptom of the disease.

It is eradicating creatures across the planet with alarming speed. Not just the exotic animals. Once common birds, animals and insects have either disappeared or seen numbers drop big time in the UK, for example.

I can say that from personal experience. I have seen them up close in the wild, in the Sumatran rain forests.

My encounter with them wasn’t quite like Sir David Attenborough lying with the gorillas but it was one of my most memorable experiences.

When you see the conservation and rescue work going on in Indonesia you realise what a tough battle they face.

We can all sit in our homes and ignore it.

Do something about it…

There are campaigns out there… you can join them.

There are conservation projects – you can donate to them.

There are ways to educate yourself and others about the situation – you can use the Internet and Social Media.

What we do on this earth and to our planet says much about us individuals, as a society, as a race.

If in a decade’s time we’re looking back at the extinction of our nearest brothers and sisters, we’ll only have ourselves to blame.