Plaque – It can be Sticky

Kate Bush on a Sound Track?
December – It’s What You Make of It 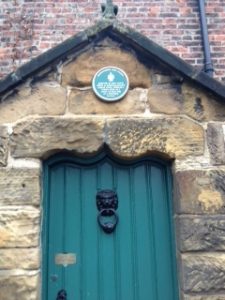 Add it to a building and the building begins to attract interest it otherwise might never have had.

It draws in the curious.

It causes an interruption or halt in the step of the casual passer-by.

It says “Here’s something you probably didn’t know… want to know what it is?”

The idea emerged in England in the 19th century and is the oldest scheme of its kind.

You may have seen one of the famous Blue Plaques in London, commissioned by English Heritage. Other, similar, commemorative signs can be found across the country – set up by a local authority or other organisation.

The one in the picture here?

Oh, that’s in a North Yorkshire market town. One which few tourists will probably notice as it’s not in the busiest part of the main street.

The plaque celebrates the fact this is the town’s oldest house. The sign goes on to say Charles 1 stayed there twice – once as a guest, once as a prisoner.

You can bet any historian would be reaching for their smartphone or heading to the library to find out more.

It adds interest, credibility and status.

So, in your marketing, do you have something which could act like a blue plaque?

Have you or your business won an award?

Have you had a celebrity endorsement?

Have you worked with big name clients or customers?

Have you appeared on television, on the radio or in newspapers and magazines?

Have you any other connection to fame?

If it’s a ‘Yes’ to any of the above then have you included that in your marketing?

It’s all part of your positioning.

If the answer is ‘No’ and you’d like to find other ways to get yourself heard in a crowded marketplace… you know where to find me.