You Cannot Avoid the Newtonian Truth 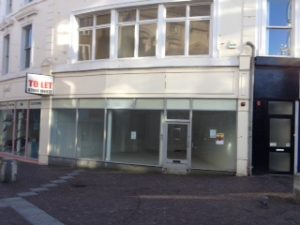 Wander along any High Street these days and this kind of picture is not unusual.

Now, on it’s own it may not mean much (apart from to the business which last vacated it). No big deal, you might say.

In fact, you could argue it is a healthy sign. Part of a dynamic shopping landscape which – a bit like The Doctor in Dr Who – refreshes, revitalises and regenerates itself every so often.

But the picture you see here masks a darker picture for this particular seaside town.

There are more empty shops to be found in every quarter. In fact, along the short street which neighbours this one, I counted SEVEN empty units. A street dull, limp and lifeless.

It really is a sad and sorry sight. Especially as this was where I spent a fair portion of my childhood.

A visit here used to be a treat. A change from the small high-street town we used to live in.

This was a resort town where the Edwardian gentry would converge for their seaside holiday. A place to be seen. A place to promenade. A place to have on your ‘been there’ or ‘must visit’ list.

There was still the long promenade high above the seafront. A harbour. Ferries to France. A large park with tennis courts where we also played football and cricket. A round building which held an amusement arcade, called The Rotunda. Mini golf and crazy golf. A boating pool. A clifftop short golf course. A fisherman’s market. And beaches of shingle and sand. A water-powered lift.

And some shops. Well, more than there were in our smaller, neighbouring town.

As a child, a visit here was a treat. Something to get excited about.

As I grew older, visits to the town lost their novelty and attractiveness. Furthermore, instead of things being added to the list of attractions, things got taken away.

We’ll get to the Newtonian bit and the message for businesses shortly.

But back to this seaside town.

Folkestone used to be one of the jewels of Kent. A place where London’s well-to-do would want to be seen when on a weekend break or holiday.

Today, some of it’s natural and old attractions remain. Some are better than ever.

The Leas remains a lovely long promenade. The lower seafront area has been rejuvenated in places with a beautiful, sculpted garden walk. The Old High Street is more vibrant than ever – and forms part of a blossoming Cultural Quarter.

There’s even an upmarket restaurant by the old Harbour.

But much of the town has gone downhill.

The shoreline visitor attractions have all but vanished. No all-weather amusements in the Rotounda (demolished). No boating lake. No mini or crazy golf. Nothing. Just shingle.

The ferries to France have long since vanished. Replaced by a giant car park and the chance to stretch your legs along the old Harbour Arm.

There are some good bits to the town but the overwhelming image is one of a centre and seafront which have seen better days.

The empty shop fronts tell the story. They send an oft overlooked message.

In business, you cannot hide from the Newtonian Truth.

For every action there is an equal and opposite reaction.

The empty shops are there for a reason.

Newton’s laws work for business, too.

You need to sell things for more than your costs to make a profit. Increase your profits and your business grows. If it tilts the other way you make a loss. If you keep making a loss you will go out of business. It’s only a matter of when.

What are the reasons for these shops going out of business and lying empty?

One or more of the above?

The empty shop you see in the picture is particularly sad for me to see.

It’s where I did my first Saturday job as a teenager. I worked as a sales assistant for Hepworth, the menswear retailer. The store closed not long after I left and that was no surprise.

Directly opposite Hepworth was another clothing store. Burton Menswear.

Both shops were in a prime location. Both shops had almost identical numbers of people passing by. But there was one BIG difference.

I really did not enjoy my Saturday shifts at Hepworth. And for one main reason. Hardly anyone came into the shop. (And when the rare customer or prospect did, there was the manager and an experienced sales assistant who usually took charge).

So, I was left standing on my feet, twiddling my thumbs, tidying rails of clothing for the umpteenth time. It was VERY boring.

What was worse, from the large windows it was possible to look across to the competition’s store. And Burton’s ALWAYS had people going in and out. It was pretty busy.

Being curious, one lunchtime I went into Burton’s and had a good look around. And it was obvious to me (even in my late teens and with no real sales background) where the problem was… for Hepworth.

Poor positioning (no clear position in the market).

Here’s what I saw.

Hepworth’s stock was more like for the old school of customer. Plain designs. Traditional colours and styles. Bespoke tailoring service on the side.

But the town’s economy was not strong. (The country’s economy wasn’t that great, to be fair). The older buyer was no longer buying suits as frequently, or buying two to last. They were making do with what they had.

More tellingly, the shop only sold that traditional type of stock. So when the younger generation came in, or parents came in to buy for their older children, there was very little on offer to them.

Burton’s was a bit more on the ball.

It did have some plain, functional clothing (like your classic white shirt for work or plain trousers) but it also offered something different.

Now, we’re not talking weird stuff from the catwalk fashion here. Not high fashion. Just high street fashion. The shirts displayed had a greater variety of colours and patterns. They also sold jumpers. Lots of jumpers.

If there was ONE thing Hepworth could have done to encourage more shoppers in, it would have been that.

Get fashionable jumpers in. Get more fashionable shirts in. (The number of people who asked about this when they came into the shop was significant. “Is this all you have?” they would say, before leaving disappointed).

But Hepworth did not. Or at least if they added knitwear it was too little and too late. (By then, people perceived Burton’s as the place to go for that).

It stuck its head in the sand. Burton thrived. Hepworth closed.

Not that the menswear outlet was the only retailer to fail here.

In the decades since, I’ve seen this prime location corner unit empty more often than I have seen it open and thriving with business.

A symptom of a town struggling to make a success of things.

There are glimmers of hope. The Old High Street and Cultural Quarter are genuine attractions and there is a nice mix of cafes and independent shops, plus a growing arts scene. The Harbour Arm appears popular in winter and summer. You can still get a very decent fish and chips.

There is a ‘new’ shopping complex near the bus station. It’s been in town a few years now. But its flagship store is not a John Lewis, M&S or Fenwick’s. It is Primark.

Now don’t get me wrong. Primark has its place. But it is not a brand which is going to bring in people who spend lots of money.

And here’s the problem, or challenge, for Folkestone.

The town used to be a seaside haven for the Edwardian gentry. I get a sense the people running it would like it to be more like that.

But Folkestone is no longer wearing a gentrified hat.

It feels run down, a bit rag tag and down market.

A sense reinforced with just a simple look at the cheap and ugly hotel which proclaims Grand Burstin yet appears to have little about it worthy of the title ‘grand’.

It’s a place which would like to rediscover old glories yet has attractions and shops more geared to the budget visitor.

It seems to attract coach parties from land-locked counties seeking a bit of time by the sea. People who love Primark, Poundland, a few pints and a fair fish and chips. Not the sort likely to want to buy paintings, hear poetry or high end shopping.

And I appreciate there may be some stereotyping being done here. I’m painting the more extreme picture to make a serious point.

The town should be marketed in a business-like way.

My sense is the people running it are NOT clear about what they’re trying to do.

My view is they are NOT very good at positioning their town.

I think there’s a confused message going out. There’s certainly a confused offering for the people who visit.

But there is good news. There is potential. It just requires some smarter thinking and a clearer marketing message.

And that’s the same for any town or city.

Or, indeed, any business.

It’s no good having a fancy website if the words on it are wrong.

There’s no point sending out a glossy brochure if the message is unclear.

There is a HUGE risk in marketing ‘hype’ which brings people in… only to leave them disappointed when they visit or buy. That’s a one-way ticket to one-time-only sales. It’s not a strategy to capture repeat visitors or business.

You need a strong product or service.

You need an audience who want what you offer.

You need to position your business so you are the natural, obvious, most desirable or only choice.

However your 2018 is being planned or shaping up, remember that your marketing WORDS (and how you present them) are far more important than anything else you do.

And it’s NOT all about Social Media. (It’s seductive yet at some point more and more people will start whispering about ‘the Emperor’s New Clothes’ when they look at the financial returns from ‘likes’, tweets and ‘follows’).

Following the crowd is not always the way to go.

Only when you REALLY look. And look deep. Do you really see what’s happening and what needs to happen.

Remember, Newton’s laws are active on your business 24/7 all year round.