MOT – Does Your Sales Letter Pass The Test?
Bishopthorpe – best street in Britain?

Mock The Week and The Art of Being Funny… 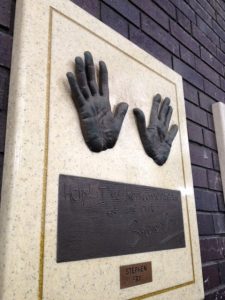 This show appeals to me – as a former journalist – because it’s about the week’s news. And the comedians tend to be wild or witty with their humour.

So, when an invitation arrived to attend a recording of the programme in London, naturally I said yes.

Now, I’ve seen other shows being made so I know a bit about how TV is put together. But each time it reinforces just how professional people in this business are. Not just the stars, of course. I’m talking producers, floor managers, lighting and sound technicians, camera operators and so on.

We turn the television on and just take it all for granted.

We do not see what goes on behind the camera lens.

We simply sit and expect to be entertained.

And shows like Mock The Week usually deliver. They finish before we want them to end. A bit like a great gig by our favourite band or singer.

For people who get to see a show recorded live, it’s an event. Something to tell your friends. Something to boast about on Social Media.

And if you observe how the programme is made you can take away some learnings to use in your own business.

Tickets to these TV show recordings are usually free – and in very high demand. That’s what happens when you have a strong product.

The audience will be made up from die-hard fans, people who love panel shows, people who like comedy in general and those who just get roped into it by friends and colleagues – sometimes with no clue about what they are about to see.

This edition of Mock The Week was being filmed at London Studios on the South Bank of the River Thames. In London, of course.

There is a place outside the building for the audience to gather. The first stage is to pass security. They check your bags and may swipe around your body with a scanner to make sure you’re not bringing in anything you shouldn’t.

The second stage is someone asks you which show you’re there for (sometimes there is more than one being recorded at the same time). You are asked to join the queue for your show.

This is where the buzz begins to build.

When you’re standing in a queue there are only so many things you can do. Look at other people. Chat with the person or group you are with. Watch what’s going on around. Most people get talking.

The Wall of Fame

At the London Studios you could also take a look at the brick wall… a Wall of Fame.

Along its length, a string of plaques embedded with the cement-moulded hands of some of the UK’s finest entertainers. The one you see in the image with this blog belongs to Stephen Fry – writer, actor, comedian, TV presenter and more.

And all the while, the people in the queue were being ‘looked after’. People were being encouraged to use the toilets before the show started – and shown where to go. People were being asked their name to be checked off on ‘The List’ and given the appropriate colour wristband.

Special guests were invited into the studio to be seated first. All very organised. All very welcoming.

The ONE message that was delivered very clearly. More clearly than anything else… was this one.

PUT YOUR PHONES AWAY. Switch off your phone, turn it to silent and keep it out of sight.

Under no circumstances was anyone to take photos inside the studio.

Security was there to ensure you took notice of that message.

There is a bit of waiting once you’re in the studio. Again, people do one of two things. Look around the set. Talk. A third might be a quick last visit to the loo.

As the start of the show looms, there is more activity to observe. Camera operators. A boom camera being expertly swung above and over the seats and back into position by an operator and an assistant. Lights being tested in different combinations.

Comedy shows want laughter. They want energy. They want the crowd to love it.

Not just to make the show sound good on TV. But also to help the panel of comedians perform to their best.

We usually just get to see the final product… 29 minutes of fast-paced, topical comedy on a Friday night.

The comedians are filmed for a couple of hours or so to create that magic half hour on the box. It’s live. They don’t have a script. They live or die by their research, their preparation and their wit.

Made To Look So Easy…

As with any professional at the top of their game – they make it look easier than it is.

You try being funny about the news. For two hours!

So, the studio has its audience. The audience is primed for the best response.

There’s a warm-up act to get people relaxed and in the mood for fun.

There’s a funny talk and preamble from the show’s producer, Dan Patterson… you may recognise the name if you love improv comedy. He’s the guy behind the hilarious “Whose Line Is It Anyway?”.

Then the host of Mock The Week is brought out – the smart and fast-talking Dara O’Briain. He introduces the panel one by one.

Again, the audience is guided as to what to expect – and the expectations on us to make the evening a success.

And before you know it, we’re ready to start the show.

If you’ve not been at a TV show recording before, here are some things you should know…

The first thing you will say on entering the studio is “Oh, I didn’t realise the set was so small” (the TV magic makes it look bigger).

Most performers will be just as you imagined they would be – only it’s a bit more special because you’re seeing the real person.

All Smoke And Mirrors…

Mistakes happen ‘live. They’re not seen in the final broadcast (unless the makers want you to see them – which in a comedy quiz panel show like Mock The Week they often do!).

What you see on TV is not necessarily in the same order it was filmed.

Extra filming is done after the main event. You still get to see that as the audience because they still want you to laugh, clap or make some noise to order. The extra stuff usually involves the host repeating different links, different intros and promos for the show.

It’s all smoke and mirrors.

UK viewers can see how the show turned out tonight (Friday 23rd September. BBC 2. 10.00pm – or catch up on iPlayer)

When we watch TV we only see the end product.

And that is all the viewer cares about it.

They’re not interested in the blood, sweat and tears that went into the making of it.

It’s the same in business.

If you have something people want and make it look good, you’re likely to have more winners than not.

Need somebody to do the blood, sweat and tears thing with writing powerful words for your marketing?

You know where to find me.