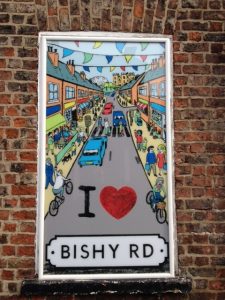 Who needs a T-shirt when you have a poster on the wall?

It’s featured in national newspapers, including The Guardian.

It’s one of the areas “Where to live in York” forums always mention.

It’s a road which has its very own website.

Bishopthorpe Road has a bit of a name for itself.

In 2015, it was named Great British High Street of the Year.

There are traders, shops and businesses in the local area around this busy street. Together, the community is called the Bishy Road community.

Well, 80-90 per cent of the shops are independent. So they’re genuinely local businesses – not national chains.

You have your flower shop, fruit & veg shop, deli, bakers and traditional butchers. Newsagent, cafes, pubs and restaurants. Hairdressers, hardware store, kitchenware shop. The only thing missing seems to be a fishmongers.

The businesses are part of a traders association which organises events from time to time. They’ve even shut the street on occasions to have a party. And, of course, every Christmas the turning on of their own Christmas lights.

It’s been described by one newspaper as York’s equivalent of Notting Hill. That may be stretching it but it certainly is a local shopping street. There’s definitely a sense of community. It’s a place where you can get great coffee, snacks and cake.

It’s surprisingly close to the city centre. It’s near to the racecourse. It’s near to a large park. It’s within walking distance of the train station. Not too far from the river and riverside footpaths and cycle paths.  A haven for cosy terraced houses in the surrounding streets.

There’s already a bit of PR and marketing behind Bishopthorpe Road. The website is light and fun in style but also has news updates about what is going on in the street.

The Association allows traders to work together and help each other’s businesses to thrive.

There’s a steady stream of ‘word of mouth’ marketing, too.

Bishopthorpe Road has a clear identity.

It has positioned itself within the marketplace.

It operates as a community of shops and businesses rather than as individual traders.

It looks for partnerships.

It looks to do something different each year to keep things fresh.

Are you doing any or all of the above for your business?

If not, what else are you doing?