Black Holes, Bullseye and a Bit of Tattyfilarious Talk

Snow Joke
Lottery Fundraiser Off to a Flyer 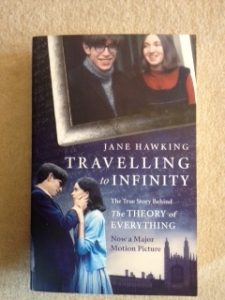 Some week for losing people, eh?

The outpouring of tributes to Stephen Hawking says so much about the guy who was one of the most well known scientists of the modern era. Not just messages from the scientific community but from ordinary folk, people like you and I.

He wasn’t supposed to live so long yet he defied the odds and did so. While most of us can barely understand the theories and concepts he talks about, we know it’s all highly intelligent and important stuff.

Many bookshelves hold his monster-selling book ‘A Brief History of Time‘.

Many people will have watched part of his story in the movie The Theory of Everything (do go watch it if you can, it’s a good film).

Some may have read more detail in Jane Hawking’s account of their courtship and marriage in ‘Travelling to Infinity‘ (a book – pictured here – which is on my shelves, partially read).

If nothing else, Stephen Hawking made us think differently about our world – and the worlds beyond.

And, despite the seriousness of his scientific studies and the nature of his condition, there was always humour.

Maybe that’s why he featured in an episode of The Simpsons and several shows of The Big Bang Theory.

And humour was very much a part of the personality of Jim Bowen, the host of TV game show Bullseye.

His banter with the contestants and the audience was a great example of engaging with people, making them feel good and communicating the brand. Phrases like “You can’t beat a bit of Bully” and “Stay out of the black and into the red, Nothing in this game for two in a bed” became catchphrases repeated in homes and pubs across the country.

A former stand-up comedian, Jim Bowen, understood timing and how to make the show light (even when contestants were shown “what they could have won.”

And humour, of course, was what comedian and entertainer Ken Dodd was all about.

The more I read about his life and his act, the more I saw great lessons in branding and marketing.

The stats are remarkable.

19 UK top 40 hits, including the hallmark Happiness and top-performing Tears.

In the 1960s and 1970s, his show seemed a permanent fixture in Blackpool, playing to 3,000-seat theatre audiences. Two shows a day on weekdays, three on Saturdays (and he would perform at a different place on Sundays – just for a break).

Ken Dodd had a clear brand.

Positioning: Family humour with a bit of sauce on the side. Gag-fest shows that went on for hours. Giving people big portions of comedy. Giving value.

Unique: Those wonderfully made up words and phrases, like tattyfilarious. Not to mention the teeth, the hair and the tickling stick.

The ONE idea: Laughter.

The ONE offer: Laughter

The ONE promise: I guarantee to make you laugh.

The backstory: the son of a coal merchant, he was a door-to-door (“on the knocker”) salesman, selling pots and pans. He thought making people smile would help so he studied what made people laugh. The creation of the Diddy Men. The sticking with the buck teeth even when offered the chance to have them put straight.

The mastery: Ken Dodd was a student of comedy. He studied the art. He did research. He kept a black notebook in which he stored jokes and how well (or badly) they did. He learned joke after joke after joke so he would never run out of one to say. It had all the appearance of spontaneous clowning and off-the-cuff gags, yet it was all carefully planned and meticulously rehearsed.

He became known for delivering shows which lasted well beyond the norm. It became part of his act to joke about how long he was going to keep his audience captive.

Comedian Gary Delaney affectionately referred to this in a tweet after the news of Ken Dodd’s death: “… his funeral will be held on Wednesday, Thursday, Friday and most of Saturday.” (I think Ken would have laughed heartily at that).

There was, of course, the infamous tax fraud case. In the end, Ken Dodd was acquitted and the matter did not stop him continuing a successful career making people around the country chuckle out loud.

He even jested about that: “I told the Inland Revenue I didn’t owe them a penny because I lived near the seaside.”

And, with wonderful comic timing, he married his partner of 40 years, Anne, just a few days before he passed away. The tax man losing out, again.

You know you have a brand when it can be summed up in one (or two) words.

For Sir Ken Dodd (knighted in 2017), one word would be ‘Happiness’ (that he wanted to spread a little bit of around the world).

The other is simply this.

There are so many of his gags and one-liners to make you laugh. Friends have shared quite a few with me this week (and even though the jokes were old we still laughed as if they were fresh that day). Here’s a couple to leave you with…

And (at the Royal Variety Performance)…

Diddy he do well? Yes, he did. Rest in peace.

P.S. What could your business learn about branding, positioning and marketing from Sir Ken? How could some different, Hawking-style thinking improve your marketing efforts and results? How could a bit of personality and natural ‘banter’ improve the messages you send out?

It doesn’t matter whether you are a coach, consultant, interior designer, web designer, children’s charity, law firm, property expert, estate agent, bricks and mortar shop, online retailer… your idea, your message, your offer, your promise, your story all make a difference. (I know because I’ve been spending the last 3 weeks revising other people’s copy and tweaking it for better conversion and results).