Branson is right, of course

Easy as Pie
Cake and Copy

Whatever you may think of the guy there’s no doubting he’s done very well for himself.

If you ask people to name a successful British entrepreneur and business person, his name is usually the first which springs to mind (or second if Lord Sugar gets top billing).

And while Richard Branson is thriving, he also shares his words of wisdom through his books, speeches and actions. 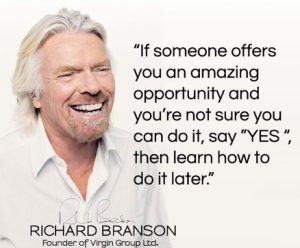 I took this advice a few years’ ago when I was working for a charity – and also looking at ways to earn additional income.

It was not enough to have the knowledge, experience and skills to succeed. I also realised there was a piece missing – marketing.

And when it came to marketing, it all appeared to boil down to the words. It didn’t matter if it was TV adverts, videos, sales letters, flyers, brochures, website, emails or sales pages. They ALL needed words.

The art of putting the words together to ‘sell’ was called copywriting (as it still is today). So I was on the lookout for training in copywriting.

I found something. Went on a multi-day course and within 48 hours had written my first ever sales page.

It wasn’t copy which was going to win any awards… but it got me on the road.

Suddenly, there was momentum.

I used my new-found copywriting skills to help promote the charity I was working for. It helped us secure funding for new projects – and added some stability at a time when the sector was under threat from Government cutbacks.

I also let people know what I was doing.

This led to my first few paid jobs in copywriting. It all mushroomed from there.

And then I was sent an invitation from the person who had delivered the training. They asked if I would like to work with their company as a contributing copywriter.

It would mean leaving my job with the charity. A move back into full freelance mode.

I wasn’t sure I could do it… but this felt like an opportunity presented to me for a reason. And, as Richard Branson, said…. “If someone offers you an amazing opportunity and you’re not sure you can do it, say YES, then learn how to do it later…”

And that’s what I did.

I grasped the new opportunity. I took what I knew and learned every day on the job.

I didn’t need to know EVERYTHING from day one.

I reminded myself of the Branson quote… one of many which are attributed to him.

And the learning continues because the world changes. Society changes. Technology changes. The nature of marketing changes.

Some of the changes are big. Some small. Some almost imperceptible.

For example, in copywriting the essence has not altered. But some of the detail has.

The classic formula with the acronym AIDA (Attention – Interest – Desire – Action) still has value yet it has been superseded by more advanced models and techniques.

There is more science and psychology which can be used (ethically, of course) to present more persuasive marketing to your audience.

You only know these things if you continue to learn, study and research. Keep up the practice of writing.

Some people only look at what’s being done in marketing today to guide them. The smarter people look back a little further for the really golden nuggets of copywriting.

As Richard Branson might (politely) say… just do it!