Owls Well If It Ends Well
Creative – A Dangerous Word 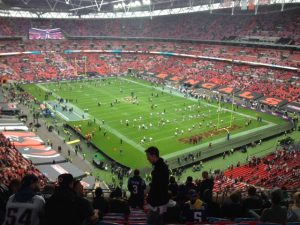 … and offers the observant some valuable insights for business, marketing and audience attraction.

The picture was taken during the pre-match warm-up.

By kick-off, the stadium was filled with 84,488 fans – a record attendance for an NFL game in the UK.

So, why are they bringing American Football across the Atlantic?

Because it has a niche yet strong core of support over here.

People who have watched American football on TV from the comfort of their armchairs in Britain and Ireland. People who have flown to the USA to watch games live over there. People who want to see the sport over here and have a team to get behind.

Six teams from the NFL agreed to play a match in or around London this year. Three of those gave up ‘home’ advantage to play over here… for the bigger game.

This wasn’t just a quickly patched-together publicity stunt. This wasn’t a lucky guess.

This wasn’t a random act of kindness…

It was pure business. Years in the making. Months and months in the planning.

Why else would teams go to all the effort and expense to fly their players, coaches, support staff and cheerleaders across the Pond?

The match I attended was not just a game of (American) football… between the Washington Redskins and the Bengal Tigers, if you must know.

This was a marketing exercise. This was business. Part of a wider vision for the game.

Think about it for a moment.

Money for Wembley. Money for local businesses. Money for the American Football teams.

People did their homework.

There’s a huge move towards ‘experience’-based tourism and leisure.

There’s a short-term gain for American Football. The Wembley match made money but was more about giving fans a taste of what the sport is like ‘live’. A very different experience to watching it only on TV, trust me.

Longer term, my view is the NFL (the league of American Football teams) wants to expand its presence in the UK. To build its fan base. To get more fans going to games. To get more people interested in following it via TV and internet. To encourage more people to take in a game when they visit the United States.

They know their audience.

They know where they hang out.

They know what is in the minds of their fans.

They know what their message is to them.

They know how to package and promote their product.

They know about delivering value.

They know about customer service.

It’s quite the show. Quite the experience.

Even if you’re not a fan of the sport you can enjoy the spectacle, the theatre, the drama.

The match I watched ended in a 27-27 draw. Both sides missed chances to win. One right at the death.

Oh, and guess what football fans…

Families turned up in big numbers.

Alcohol could be bought and consumed INSIDE the stadium. With no trouble.

Opposition fans sat side by side with no punch-ups or seats ripped up and thrown.

Before the match they were taking photos of each other. Selfies together.

What could you learn from all this?