The Truth About The Hunt

The Power of Three
How to stand out from the crowd 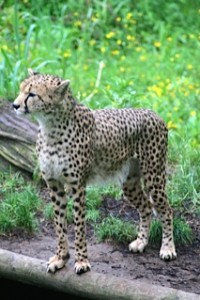 Have you ever watched one of those animal or nature documentaries by Sir David Attenborough?

Isn’t he just a brilliant storyteller?

Isn’t the camera work by the film-makers simply breathtaking?

Isn’t it impossible to be drawn into the programmes without running through a range of emotions?

The entrepreneur or dynamic business could certainly learn more about how to gain and hold an audience’s attention from the way these TV series are put together by the BBC.

But that’s not the lesson from Sir David I wanted to share today.

I was struck by the theme of the first episode of his latest series, The Hunt.

The programme opens with a leopard’s attempt to hunt impala in the grasslands of Africa. The leopard’s tactic is stealth. This majestic big cat needs to be within four metres (about 12-14 feet) of its prey to strike with any good chance of success. Even then, there are no guarantees.

The leopard only requires one kill. That provides enough food to last a week. It uses trees, bushes and shrub for cover. Out in the open it would be spotted too quickly and the impala alarm system would allow the herd to scatter to safety.

At first the leopard creeps through undergrowth but cannot get close enough to an impala to attack. It must venture into the open savannah. To avoid being seen, the hunter drops into a gully and inches along its length to avoid being spotted by those grazing near the top edge above.

Its first attack on an impala feeding in the gully is thwarted because it gets spotted too quickly. Next to be lined up is an impala near the edge. The leopard still has surprise on its side and this time it gets hold of the target. But incredibly, the impala is able to shake itself free of the leopard’s clutches and bound to safety back in the herd.

As you watch the drama unfold on the screen, you could be forgiven for thinking this failure was bad luck for the leopard. This was a fluke. This was a rare event. But no…

Sir David tells us six out of seven attempts fail. Victory for the hunter, as it turns out, is not the foregone conclusion we may have thought it was.

The leopard hunts alone. Wild dogs hunt in packs. They have a taste for wildebeest.

The strategy or tactic is to get wildebeest to run – and then tire them out. As these curiously beautiful yet devilishly dangerous dogs set off together, you might assume only one outcome. It doesn’t always turn out that way.

In the programme, we’re shown the chase. Initially, the herd of wildebeest runs away together. When they do this there is little chance of success for the pack closing in. The wildebeest have another tactic, which is to stop and gather in one large group. Turn round. And confront the enemy.

A bit like in the old western movies, where the wagons would form a circle. The cowboys used their rifles to ward off the attacking Indians. In the animal world, the wildebeest use their circle of horns to fend off the dogs.

This time, the hunters are in luck. A couple of wildebeest have split from the pack. A second pursuit begins. This time it’s personal. One pack on one target. The mother leads from the front until she tires and allows her young boys to continue the pursuit.

The chase seems to go on for minutes and minutes. The overhead camera shows an incredible angle as the dogs close in on their intended prey’s heels. As the dogs adjust their positions, so the wildebeest responds with high-speed subtle shifts in direction, belying its bulking frame.

It’s like a chase scene straight out of a Hollywood movie. The lead dog get close. The wildebeest puts in a spurt to avoid its fangs. A second dog moves forward. Again, the target shimmies away from harm.

A large herd can be seen ahead. Another 20 seconds and the wildebeest will be back in the safety of a group. But running and evading is tiring. Within seconds of the winning line, the animal is tripped by one of the chasing pack. With one last desperate effort, it tries to stay on its feet and kick out. A successful lash of the hoof would break the dog’s jaw. But this time the hunter has timed his attack perfectly.

The beast is taken down. The rest of the pack are on it within seconds. The feast begins.

The herd watches on. It’s a scene they’ve seen before.

But the wild dogs know one kill is only enough to feed so many of them for so long. A pack can ale on an animal 10 times their weight but they need to kill every day. And they don’t always get their way.

The assumption is the hunter is always on top. It’s not the case.

In Tanzania, there is filming of a large crocodile at a watering hole. His last meal was nearly a year ago. He, and the other hunters await the annual return of the rains and the wildebeest. The crocodiles rely on the wildebeest’s thirst. The hunted know there are likely to be crocodiles around. The hunters know patience will pay.

The honours in this battle appear even. Many failed attacks. At least one successful smash and grab raid at the water’s edge.

The assumption is the hunter always wins, the hunter leads a grand life eating at will. That’s not the case.

Hunting, it turns out, is a tough business.

Cheetahs are beautiful, elegant and strut around as if they own the place. When in motion they appear even more beautiful, graceful and powerful.

They must have it all their own way, right?

Well, actually, no. Being able to run at up to 75 miles (120km) per hour and accelerate from 0-60mph (96km/h) in under three seconds does give it a powerful advantage. But it can only sustain that speed and rapid change of direction for a very short while, maybe 30 seconds tops.

If their prey, such as antelope, can take evasive action for half a minute then they know escape is highly likely.

A female cheetah usually has a few young mouths to feed. Failure to secure enough kills puts the family at risk. Not just through lack of food. Her offspring learn from her how to hunt and survive.

Sir David Attenborough summed up this struggle in one sentence. I was shocked and saddened to hear it as this is one of my favourite animals.

We think we know about these things but the truth is…

The hunt is not all that it seems.

While watching the programme, a thought popped into my head. My mind’s like that. And the thought was this.

Animals hunt for food. Entrepreneurs hunt for clients and customers.

The assumption, in both cases, is the hunter knows what he or she is doing. The hunter will have success.

And it’s simply not true.

Let’s not be too harsh on the animals. They DO know what they’re doing. It’s just their prey also know what they are doing and have defensive strategies and tactics in place to repel attacks. To survive. To live another day.

When it comes to the humans, it’s a bit more difficult not to be judgemental.

Entrepreneurs and companies know about their business, sure. They’re usually not so smart when it comes to marketing.

Marketing and copywriting is about the hunt for business. New leads. New sales. New profits.

Often with no understanding of why they’re doing it or what results it brings.

The herd says Social Media is what you have to be into.

The herd says you cannot be seen without this app or that app.

The herd says letters, leaflets and postcards are dead. We’re in the digital age now.

The herd says you’ve got to follow Guru X or Guru Y.

Yet do you ask the important question.

How many “kills” is your hunt delivering?

Remember, animals as hunters don’t use one strategy. They adapt. They learn from their mistakes and failures.

They find another way. They they take action. They test it. If it works they keep doing it until it fails. If it continues to fail they stop following that tactic and find another one.

That’s how the business hunter should be.

Clear on strategy. Clear on tactics. Clear on the approach. Ready to pounce when the time is right.

When you’ve got hold of a juicy leg, don’t let go.

When you’ve found a valuable source keep going back to it.

When your prey’s defences are simply too strong, don’t give up… and be prepared to withdraw and try again another time.

The herd will say to people “Your marketing and copywriting is fine. Nothing to worry about. You are the clever praying mantis of the business world.”

And maybe through pride. Arrogance. Laziness. Complacency. Ignorance. Stupidity. Some other factor…

…  You believe it. You keep doing the same. Keep following the herd.

If the herd was truly your friend it would not only tell you about the praying mantis.

Like Sir David Attenborough, it would tell you the story of the Parsons Chameleon.

A creature which sits and watches.

The chameleon can only see prey if it moves. Stay still and you’re safe.

The praying mantis is a clever killer.

But it can be complacent.

Just when the smug mantis is thinking about its next meal it makes a fatal mistake.

It twitches just a fraction.

That tiny fraction is all it takes.

From nowhere, a sticky tongue accelerates, grips the mantis and pulls the helpless insect into the mouth of its hunter.

The Parson’s Chameleon enjoys its meal.

The hunt is not what you might think it is.

There is a lesson from the natural world for the business world.

Have you grasped it, yet?

Or do you need Sir David Attenborough to spell it out for you?