Would You Pass The Psychopath Test? 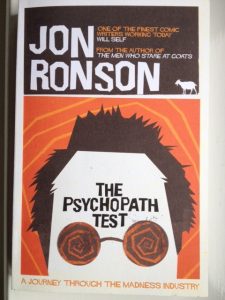 I only ask because it does appear at times to be a Mad, Mad World out there.

Just look at politics. Brexit. Education. The health service. Gridlocked roads and ticket carrying sardines on the trains. How much the modern footballer gets paid. The price of gas, electricity, fuel and water.

Don’t you think it’s all a bit mad?

I’m not sure if there is a test for craziness but I recently discovered there is one to determine whether or not you are a psychopath. And that’s got to be helpful, right?

Jon Ronson’s investigative and entertaining book plays with a few pieces of the madness jigsaw. It opens with a mysterious book puzzle and ends with a story of avoidable death. But the main feature is a tale which involves a Catch-22 of the deepest human nature. It explores the question ‘What is sanity?’ and just how uncertain and ‘dangerous’ the world of madness can be.

Tony’s tale is this. He committed GBH (assault). He was facing five to seven years in jail. After his arrest, while held in custody in the cells, he was told by inmates he should say he’s “mad”. That way he would be put in a county hospital and have it easy.

Tony did as he was advised. And got sent to Broadmoor instead. Broadmoor Psychiatric Hospital. When Jon Ronson interviewed him, Tony had been inside for 12 years. Had he gone to prison he would have been a free man six years earlier.

The problem for Tony was he took the psychopath test (yes, there is a real test for it) and “passed” (or failed, depending on how you look at it). He was declared a psychopath.

The more Tony attempted to behave ‘normally’, the more the experts viewed that as a sign he was indeed a psychopath. And, of course, if he kept up the “I’m mad” story they would keep him locked up in the loony bin.

I say Psychopath Test. It’s not so much a test as a checklist. A 20-point behavioural checklist. It was created by a prison psychologist, Bob Hare, in Canada and his PCL-R Checklist has become the standard measure.

When you look at his list, some factors seem obvious ones to look out for. Number 4 is pathological lying. Item 6 is lack of remorse or guilt. Number 8 is callous/lack of empathy. Item 12 is early behaviour problems. And number 20 is Criminal versatility.

Some signs of a psychopath are less obvious.

Some might even describe someone you know. Item 1 is glibness and superficial charm, for example. Number 2 is grandiose sense of self-worth. Number 11 is promiscuous sexual behaviour. Item 13 is lack of realistic long-term goals. Fourteen is impulsivity and fifteen is irresponsibility.

I definitely tick Number 3 on the list… “need for stimulation/proneness to boredom”. And if you take this definition at face value doesn’t that mean EVERY child has a psychopathic tendency? Or is it just teenagers?

Why all this crazy talk?

Well, I’m not for one moment suggesting you or I are psychopaths. But there does seem to be plenty of madness about. We see it, and hear and read about it every day.

Here are a few which spring to mind for me…

Motorists who tailgate other vehicles at up to 70mph or more – even though it’s now illegal.

The Welsh rugby player who put his hand inside a lion’s cage – and got bitten.

Drivers who fail to adjust and slow their speed in snow, sleet or fog.

The parent who lets her young daughter roll on wheeled-heel shoes on a busy train platform.

The chief constable who says drivers should be fined even if they are just 1mph over the speed limit.

Rewarding executives with BONUSES for failure.

And there’s plenty of ‘madness’ around in marketing, too.

Reliance on Social Media for marketing as a strategy.

Making great offers (but failing to do follow up).

Talking “Me, Me, Me” when people really want to know “What’s in it for me?”

Ignoring proven old-school tactics which work for so many types of business.

Sending emails ‘for the sake of it’.

Starting the marketing funnel plan in the wrong place.

Spending too little time on the copy.

Spending too much time on the copy (when you could get a copywriter to save you the bother and do it right for you).

Failing to  review, revise and tweak the copy.

It reminds me of that definition of insanity usually attributed to Albert Einstein: “Doing the same thing over and over again and expecting different results.”

If you want your web pages to do more for your business.

If you want to avoid dull emails or know how many is the right number to send.

If you want an expert eye to review, edit or fine-tune your copy.

The chances are I can help you.

A quick conversation costs you nothing.

Remember, if your marketing is not working or firing on all cylinders it’s a sign something is not right. Doing nothing is like ignoring an engine warning light on your car.

There may be some method in my madness but I’m no psychopath (well, only 27 per cent of one according to the checklist). The words I write will be well-adjusted and behave themselves. Almost certainly less mad than the messages and message many businesses are sending out right now.

Want to check it? You know what to do.