Rohan – Riding the Path to Purchase

Lesson or Two from Montenegro
A Load of Rubbish 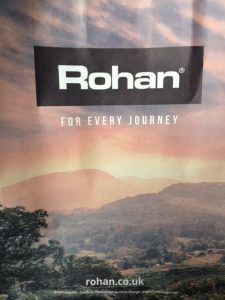 … is the outdoor clothing, footwear and accessories company named after the fictional land in Tolkien’s Lord of the Rings.

You may have seen or visited one of their stores in the High Street – although there are less than 60 nationwide.

Their clothing is known for its practicality more than for its style.

I was introduced to Rohan when living in Swansea, South Wales in the 1990s. My flatmates could not believe I’d never heard of the brand.

They converted me into a buyer and fan.

I’ve found Rohan clothing to be light weight, hard-wearing and really easy to wash and dry. It’s been with me on trips through Europe, the Middle East, South East Asia, Australasia. It’s served me brilliantly on trekking trips in Nepal and Africa.

In fact, it was only a few years’ ago that I stopped wearing my favourite blue shirt. It had begun to get a little ragged around the collar and cuffs… but then again, I had been wearing it for 20 years around the globe. It enjoyed a good innings, as they say.

Like all strong brands there is a story behind the company.

Rohan was founded in 1972. Research chemist Paul Howcroft and his wife Sarah set up with £70 and ran things from a small house in Skipton, North Yorkshire. It was close to the West Yorkshire textile mills.

Their first bit of outdoor clothing as a pair of quick-drying mountaineering salopettes. But the brand became known for its bestselling ‘Bags’ – trousers for walking, hiking and adventures.

Like with all stories, there have been some ups and downs.

The company struggled in parts of the 1980s. Paul died in a motoring accident in 1993. The company has changed hands a few times, now owned by the H. Young Group.

Rohan, like many stores on the High Street, is battling for business.

There is increased competition from a bigger range of rivals. There is lower and less consistent footfall in many towns and city centres. More and more people are shopping online.

And it would be interesting to know how Rohan views its future business model. Does it still want to have stores? Does it want to keep all its stores – and maybe open more? Or is more of the focus going to be on e-commerce and its online shop?

Just the other day I popped into my local branch to collect some shirts and trousers I had ordered online.

It led to a lengthy conversation with the manager about the state of business, marketing and the balance between in store and online sales.

You see, I’m not a big shopping fan. But for most things, I do prefer to browse in a shop than browse on the computer.

In a clothing store you can see the goods “in the flesh”. You can feel the texture and quality of the fabric. You can try stuff on. You can easily ask for advice or the next size up or down from a member of staff. You might even be able to negotiate a better price or discount, if your courage and conversation is up to it.

So, I would really hate to see my local Rohan store close (I’m not saying its under threat, it’s just a general concern as a consumer for ALL bricks-and-mortar retailers).

But here’s the deal.

Business needs customers. Paying customers. Without them, the business would soon fold.

Here’s where the whole issue of marketing, copywriting and e-commerce kicks in.

You see, I made a purchase because I received an email message from Rohan about their sale. One click and I was straight through to their website. I was able to browse the “Men’s Offers” straight from my smartphone.

I quickly found two pairs of walking trousers and a couple of shirts which looked the part. I checked availability in my size. All good. I double checked the prices. All good. I bought online.

When it came to delivery there was an option. Pay a delivery charge or collect from store for free. Always with an eye for a bargain, I chose to collect in person.

I even received a phone call from my local store to say when my order was ready for me.

Which brings us back to the in-store chat with the manager.

I bought from Rohan… so Rohan get my money regardless. But it’s recorded as an online sale. The store gets no commission, reward or recognition for managing the “collection” of my order.

So by ordering online instead of going into the store for my sale-offers browsing and buying, I was not supporting the future of the store or its staff.

We all grumble when shops, banks and Post Offices close. We rarely stop to think about all the factors which caused them to shut.

No people. No revenue. No viability, no future. This is business.

I pledged to get back to doing more of my shopping in store than online.

And then the conversation turned to marketing (because I mentioned I’m a copywriter).

I made this simple observation.

The sales email Rohan sent me made it quick and easy to go straight to the website and shop online. It did not encourage me to go to my store. In fact, it gave me the impression these sales items were online-only offers. They were not. I could get them in store as well.

So, is the company’s own marketing doing its stores a disservice?

I also commented on the marketing emails I receive from Rohan.

They have a clear, high-quality brand feel. Yet they also frequently focus on scarcity or price.

The company does send emails about its products, with emphasis on the clothing’s main appeal factors (lightweight, quick drying, durable).

But there is rarely anything personal, or storytelling  or something which really “sells” why this clothing is SO good for the walker, hiker, wanderer, adventurer, explorer or casual outdoors type.

No. That kind of stuff is left for the Rohan website.

Dig deeper into the site and you find some really interesting (and useful) content, including:

Which got me thinking.

Why don’t they put a bit more of THAT content into their email marketing?

“Meet Brian from Stockport. He’s been a Rohan fan and customer for 17 years. He’s just returned from a hiking trip in Transylvania and found an unusual use for his Rohan Bags. Read more here.”

“What’s your oldest bit of Rohan clothing? Where has it taken you? Tell us your story – we’ll share some and the best FIVE entries each receive a voucher towards some new gear with us.”

“Tell us WHY you love Rohan” (this brings REAL people into the marketing mix. It shows how the products are used in REAL life, the REAL world. Great for social proof and pre-purchase reassurance).

“STORE HEROES: This is Jenny, who runs our Clacton store. Find out more about the people who make our company what it is today”

“From Tibet to Timbuktu. See how the Rohan gear you gift is changing lives across the world.”

And those are just some ideas off the top of my head.

A sprinkling of these would help to tell the story of Rohan and help showcase the brand values, reinforce the products’ best features and add a ‘human’ touch.

Like so many companies, the marketing at Rohan is centralised. So there’s not much scope for local stores and managers to “do their own thing” – or react to what’s happening in their location.

In my experience, Rohan stores tend to be on the small side and tucked away off the main High Street (which makes sense if you want cheaper rents). But being a little “out of the way” makes it a bit harder to find the footfall or attract the casual browser.

How useful would it be – say if there was a festival or event in town – for a store to be able to print up some leaflets and hand them out in the High Street? A simple way to point people in the right direction.

Much of today’s marketing is about brand, gloss and taglines. Yet sometimes it feels like the thinking behind it is less modern and more Middle Earth.

And there’s something stores can offer that online, AI, algorithms and chatbots cannot. And that’s people.

The Rohan store manager was saying he had many regulars. And some customers love going into the shop just to have a chat. A bit like people do in the village shop, newsagents or Post Office.

We are, above all, human. And humans are social animals.

When stores are gone, they are gone.

What kind of High Street DO we want? And how do we make that happen?

Marketing and how we guide the consumer is part of the answer. Companies should remember that if they are balancing stores and online shopping.

There’s so much more one could say about this topic. But let’s leave that for another story.