The Father of Advertising

Trust – It’s 100 per cent or nothing
Endangered Species 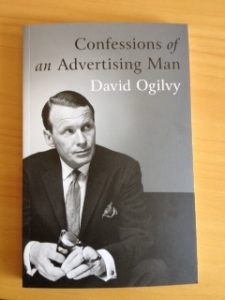 If you in advertising or marketing you’ll know the name well. If you’re a business which has used his services and those of his agency now known as Ogilvy & Mather… you will understand better than most why what the man says is worth listening to.

Ogilvy died in 1999. His ‘Confessions…’ book was written in the 1960s and updated in the 1980s. So you might be thinking what relevance do these ‘old’ words have for business today?

If you would like a solid dose of common sense.

If you enjoy words of wisdom.

If you are open to hearing from one of the most successful people in the business.

Then David Ogilvy is as relevant today as he was decades ago.

Let’s take some of his lines.

“When people aren’t having any fun, they seldom produce good work.”

How many businesses today use the word or make it part of their ethos and culture? No wonder so many 9-5er’s are so bored, productivity is down and performance sags well below where it should be. In so many companies.

Even for the entrepreneur and smaller business owner there is a message here. Take time out from work to relax, de-stress, give yourself a chance to think and get a fresh perspective on how to move forward.

Ogilvy also said “Pay people peanuts and you get monkeys.”

It was true then. It’s true today.

People are willing to spend thousands on a fancy new website. They will part with their credit card to be seduced by the latest fad or flavour-of-the-month ‘guru’. Yet they grip their money belts ever so tightly when it comes to the most important element of their marketing strategy.

The copy. The words that go on the web pages … landing pages … squeeze pages … sales pages … postcards … envelopes .. and in sales letters … lift letters … brochures … leaflets … and, yes, even video sales letters and videos … because all but the super confident would face to camera without a script.

All tools for marketing. Each one requiring words. The words which will be seen by your audience. The people you want to become your clients and customers.

And, yes, you can search for the cheapest copywriter or pay for a ‘template’ but why would you?

Why would you invest in your business and then throw it all away because you thought you could cheapskate on the copy?

The internet and social media have made the marketplace a very crowded place. What may have worked in marketing two or three years’ ago may not work today. Some things have changed. There is more change ahead, for sure.

Ogilvy once said “Ninety-nine per cent of advertising doesn’t sell much of anything to anyone.”

It’s a great line. You may wish to alter the percentage figure but the punchline stands the test of time.

You can deceive yourself and think marketing and copywriting is easy, fast and cheap. But just take a look at your results. Are they as good as they could be? Are you even getting results?

Because I know people who have spent large wads of cash on those who claim to have the ‘magic bullet’ for marketing success – and not got their money back.

Maybe that old-school value of integrity promoted by Ogilvy is less available or respected today?

It’s not difficult to see where Ogilvy acquired his values. He was once a chef at the Hotel Majestic in Paris. Ogilvy and 36 other chefs worked 63-hour weeks, under head chef Monsieur Pitard…

Ogivly tells the story of a time when the chef garde-manger (or pantry chef) told him to take some raw sweetbreads to the chef saucier (the sauce cook). Ogilvy knew the sweetbreads were ‘off’ and even though, covered in sauce, the diners might not realise and perhaps suffer as a result.

Ogilvy protested to the chef garde-manger, who waved him away. It was explained the head chef would not tolerate running out of food. There was a dilemma to resolve. Do as he was told and risk poorly diners. Or go behind his colleagues’s back and tell the big boss.

You can guess what he did, of course. Ogilvy went to Monsieur Pitard and asked him to smell the sweetbreads. The head chef did so and, without a word, went to the chef garde-manger and fired him on the spot!

Ogilvy learnt many more lessons from his time in the kitchen and took away with him many of the values and attributes of Monsieiur Pitard.

The culture at Ogilvy’s advertising agency included a number of driving principles. Five of them are given below:

Cheap-dollar writers will not put a thousandth of the craft a premium copywriter puts into their words.

If you like fast food go ahead and buy cheap copy. You may strike lottery-style lucky and find a one in several million gem. But probably not.

If, however, you understand a business is like a plant which requires nurturing in the garden, you may also recognise that a deal is a value exchange.

Pay peanuts, you get peanuts.

Let me put it another way. If a copywriter could help you make £50,000 what would it be worth you paying him or her?

Either way, it’s more than peanuts.