Nobody Minds a Little Dribbling

Badminton – Getting a handle on marketing
Learning from the Past

By a little dribbling… 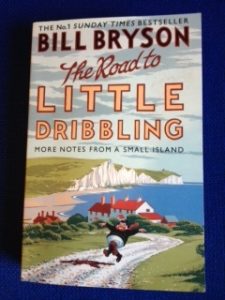 … I don’t mean drops of saliva hanging from the mouth.

This is about the latest travel book by Bill Bryson.

No surprise, really, as Bill Bryson has form when it comes to creating hit books.

In fact, it is one of his best known titles which sparked the idea for his latest travels around the UK.

Notes from a Small Island was written some 20 years ago. The account of Bryson’s travels around his adopted country became the best-selling travel book ever. In a BBC poll it was voted the book that best represents Britain.

So, when the writer had a meeting with his publisher, Larry Finlay, to discuss the next project, the anniversary of the record-breaking title was brought up.

Bryson didn’t want to just repeat the route he had taken in the original book. So he looked for a different way to explore a little bit more of the UK, his ‘small island’.

Thus was born the journey from Bognor Regis in the south to Cape Wrath in the outer north west of Scotland. And, in turn, the book The Road to Little Dribbling (which you will have guessed by now is a place name)  was created.

When it comes to ideas and marketing, this book seems as simple an illustration of how to go about it.

You do not need a completely new idea. You can take an old one and re-work it.

You do not need a completely new product. You can create a variation on the original.

You do not need to go overboard on marketing when you already have a strong and loyal fan base. You can use a previous winner to promote your rising star (just take a look at how Hollywood movies are promoted… “from the Director of….” or “Starring Oscar-winner….”, for example).

This book has a number of audiences.

Fans who know Bill Bryson as a writer and have read all (or most of his books).

People who have read one or two of his books (and may be tempted to try out his latest one).

People who remember Notes From a Small Island (or one of his other bestselling titles) but had not realised it was by Bill Bryson. If they loved the original they are likely to be curious about the Little Dribbling ‘sequel’.

People who have never read Bill Bryson but get given a copy of the book by a friend, colleague or family member who enjoyed it.

People who browse book shops, see the cover, pick up the book and like the look of it enough to buy it.

I think it’s safe to say Mr Bryson will do very nicely out of his latest work.

What can you learn from this idea?

How can you re-package, refresh or revise one of your previously successful products or services? (a consultant friend of mine has just re-packaged one of his top-selling products as an online service accessible via club membership subscription). Same content, different medium. Simple.

Get it right and you may find more than a little dribbling is added to your revenue.