December – It’s What You Make of It
Happy Holidays

This roof is seeing some activity… 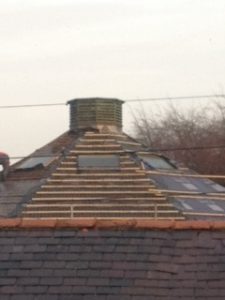 … It has been interesting watching the work being done.

On the first day there were at least four roofers up there.

Two worked on the first section of roof. Their job to remove the existing slate tiles. One stood below, collecting and carefully stacking the tiles being slid down the slope of the roof towards the scaffolded gangway below.

Another stood and watched, perhaps a foreman.

The men were wrapped against the cold in their thick jackets. Each wore a safety helmet.

To take the old slates off one hexagonal section, lay down a weatherproof sheet and pin on fresh wooden battens took a whole day. The final strip of wood was put on just as darkness overcame the daylight.

The next day there was a change of tactics.

Instead of two people up on the roof to remove the existing tiles, just one. And just one person below to help stack the tiles and help clear debris. The odd sighting or two of another roofer on the scaffolding.

It made me curious. Why the change?

My guess is the roofing team had achieved their day one goal slower than planned. So a change of plan was agreed.

The result? The second section was stripped of tiles, weatherproofed and battened down a good hour before darkness.

This effective approach was repeated for the other four segments of the roof.

When the job is complete this building will have a smart, fresh roof – ready to protect against the elements once again.

It was fascinating watching a bit of the work being carried out each day.

It made me think of two things…

One. Is there a way of doing things you can change in your business? A fresh strategy. A change of tactics. A little test.

The owners of this building are investing not just in a new roof. They’re investing in their future. They see the value of the long-term view.

When they needed the job doing right – they brought in a specialist.

If the thing which needs a bit of attention is your marketing message I know a bit about laying the foundations, building brick by brick, and getting the words strong enough whatever the weather.