LoveFilm – The Easy Way
Badminton – Getting a handle on marketing 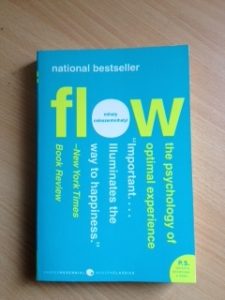 … is a curious thing.

Some people experience it occasionally. Some never quite seem to feel it ever. A few have it in their lives most of the time.

When we say flow – as in a state of flow – we tend to think of top athletes or sportsmen and sportswomen. They describe themselves (or we describe them) as being “in the zone”.

What we mean is during their event, match, game or competition they appear to have total focus, absolute concentration, a relaxed and confident manner, and a clear vision of victory.

Yet flow is something any of us can have, can achieve, can experience.

Just think about it for a moment.

Have you ever been doing something and time seemed to run differently to normal? As if time was speeded up. Or slowed down?

Maybe you were out for a stroll.

Maybe you were running.

Maybe you were talking the dog for a walk.

Maybe you were in the bath or shower.

Maybe you were driving your car.

Maybe you were writing.

Maybe you were reading.

Maybe you were doing a crossword puzzle.

Maybe you were knitting.

Maybe you were rock climbing.

Maybe you were playing music or a musical instrument.

Maybe you were engrossed in some other activity.

Whatever it was, you suddenly found time had passed without you knowing it. You were just absorbed in what you were doing.

Without realising it at the time, you were probably in a state of flow.

Just being. Just doing. Just “in the zone” for a while.

It’s something which occurs in business, too.

You recognise when others are in flow. Your senses pick it up with effortless ease. As we all can and do.

In all likelihood, these people will…

Have a clear vision, mission and purpose.

Understand how they work best.

Know with whom they work most successfully and fruitfully.

Like a perfect eclipse, the picture is one of total alignment.

If we were judging it based solely on their marketing, we would probably conclude that few businesses were “in flow”.

It’s as if people get sucked into behaving in line with the norm. Which leads to sameness, similarity and boring familiarity.

Why do entrepreneurs and businesses shy away from being their TRUE selves?

If your marketing message is out of alignment with the core and nature of you and your business, the chances are it will send the wrong signals out.

Naturally, if you’d like some help with that you know where to find me.