Lottery Fundraiser Off to a Flyer
Display what you have 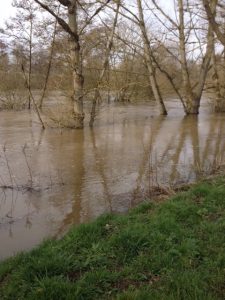 … is an all too common site in parts of the UK – especially as winter turns to spring.

In North Yorkshire the recent snowfall was followed by 48 hours of near endless rain. So, just as the drainage systems were trying to cope with melting snow – they got hit by more water. Gallons and gallons and gallons of it.

The picture you see here is of a field near the tiny country village where I live. Usually it is green (like the bank in the foreground) and you can see a lot more of the trees. As you can see, it’s completely flooded.

There are many advantages to living in the countryside.

It can be beautiful.

The rolling, green landscapes. The trees. The large, beautifully manicured lawns. The birdsong. Horses in the fields. Sheep and cattle grazing near the roadside. Miles and miles of wild or carefully trimmed hedging.

It can be peaceful.

It can be very quiet on the lanes and roads. In places you are more likely to meet a horse and rider than a motorist tearing from A to B.

But there are drawbacks.

The lovely landscapes are sometimes spoiled by litter.

The countryside is not always as peaceful as you might think. Take my village. From my office space I can sometimes hear military jets whooshing by low overhead, a chainsaw on a nearby farm, a neighbour’s petrol lawnmower on the go, the shooting of grouse or the whining engine noise of an acrobatic training plane.

… Well, the roads can be a problem in bad weather. Especially if you are not the owner of a 4×4 vehicle.

My car is rear-wheel drive. It loves the summer. On a motorway it just purrs along without a care in the world.

But in winter it can sometimes be a struggle – even with winter tyres. My car hates snow. It hates ice. It hates flooding.

All is fine in good weather. It’s not too bad in fresh snow, providing it’s not lying too thick or has ice underneath (our lane is rarely gritted). Ice is a different matter.

What it meant one day earlier this week was this.

I was stranded at home. I could not drive out of the village.

Flooding had caused the ford at the northern end to swell too deep for my car to drive through. Flooding had created a ‘pond’ in the village road to block off access to the middle track out of the village. And, in turn, the southern exit from the village.

Even when the ‘pond’ had disappeared to something shallow enough to drive through there was still a problem at the southern end. The flooding of the fields had caused deep water to sit across the road in three areas.

It is only in the past few days that I’ve managed to get through the wide pools of flood water with extreme care.

Fortunately I work from home. So I didn’t really need a plan B.

I could have asked a friendly neighbour for a lift. Or parked my car at one end of the village to avoid at least the ‘pond’ which cuts off the traffic.

As one neighbour kindly put it: “Your car’s not really suitable for the country, is it” (it was more of a statement than a question).

And they had a point. If I had a 4×4 then the weather would never be an issue. A case of having the right vehicle for the circumstances.

Which is where I make a lurching segway to marketing.

Because that’s kind of how it works with promoting your business. You want to have the right ‘vehicle’ for doing so.

It needs to take account of your audience. Their stage (or stages) of awareness. How they go looking for things. Where they ‘hang out’.

My observation is that many businesses just go for the gadgets, the glossy website and ‘bells and whistles’ systems without understanding first whether they need them (or even whether there is a better solution for their goals).

It may not bring the type of flood you are hoping for. (I.e. a flood of customers and clients rather than a flood of complains or problems).

Somewhere in the mix is copy.

Some businesses forget or fail to understand the value and importance of words. And that’s OK. As long as they realise that not grasping that idea is causing money to flow down the drain.

I just hope their drains can cope with the flooding.