The Dog on Your Doormat

AI copywriting – should we be worried?
Senses and Sensible-ity

You can’t beat a puppy-faced dog.

Take a look at this little fella… 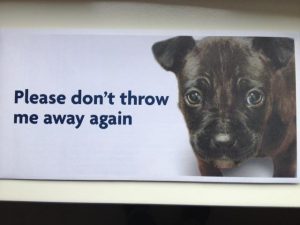 What is the emotion it makes you feel? What word or words just went through your mind?

This dog certainly has eyes that can melt the heart.

And this promotion by the RSPCA is very promising. It could do very well if the appeal letter inside works as well as what’s on the outside of the envelope.

To my mind, the image of the dog catches the eye first. Then there’s a quick switch to the copy.

To me, the words on the front of the envelope carry a double meaning.

“Please don’t throw me away again” is what the dog is saying to us. He’s clearly got a hard luck story to tell (and I would expect that story to be told in the appeal letter inside).

“Please don’t throw me away again” is also what the charity is saying to the reader about the envelope.

Because this is direct mail. Which, when it lands on doormats around the country, quickly gets treated as junk mail.

The sort of thing we pick up, take one look at then chuck in the bin (or recycling bin).

The copy connects with exactly the thought which is running through the reader’s mind. I’ll just throw this away (like I did last time).

This may be me reading something into it which isn’t there but what do you think? Did you see what I saw when you read the line?

Either way, this envelope gets your attention.

And on the reverse side there’s more. 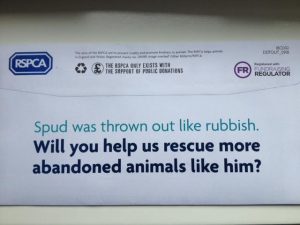 We find out the dog’s name is Spud. He was treated like rubbish. And he’s not the only dog to have been treated that way.

The question is a bit risky because there can only be a yes or no answer. If the reader thinks “No” to that specific question, they’re unlikely to open the envelope. And even if the answer is yes, it may not be enough to make opening the envelope a priority.

Maybe it’s something the charity will test or split-test.

The RSPCA is not a small organisation. In fact it promotes itself as the largest animal welfare charity in the UK. It relies on fundraising and donations to meet its running costs. And its expenditure bill is high. In 2017, it spent around £129 million from an income of almost £141 million.

Established in 1824, the charity’s work is around animal welfare, preventing and investigating cruelty to animals (not just dogs), and animal rescue.

So much for Britain being a nation of animal lovers, you might say.

And to keep its work going, the charity requires a successful marketing machine.

Direct mail campaigns like the one spearheaded by Spud the dog are critical to its existence.

The charity cannot afford for you to throw away the envelope. It needs to bring in enough donations to cover and exceed the cost of sending out the promotion.

I won’t deal with the letter inside the envelope. Perhaps a topic for another day.

If it’s as intelligent as the envelope, it has a good chance.

Which is good news for Spud and his pals.