Leon (but not the Spinks one)
Story: The Gunslinger, Psychopath and Rattlesnake 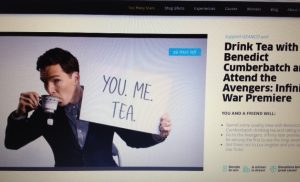 He pops up everywhere. Most recently as Sherlock Holmes on TV and Doctor Strange on the big screen.

He also does a bit of work for charity.

And one organisation has come up with a great way of getting the star actor involved in its latest fundraising promotion.

You get to drink tea with Benedict Cumberbatch. Have a chat with him and grab a selfie.

That’s in the USA.

As is the other part of the prize. Being invited to attend the premiere of Avengers: Infinity War in Los Angeles (which, unsurprisingly, stars the British actor). Flights and accommodation also thrown in.

This is a BIG draw prize, perfectly judged.

Benedict Cumberbatch is one of the most well-known and critically-acclaimed actors of his generation. Who wouldn’t want the opportunity to meet him (even if you not the biggest fan)?

Even if not the biggest fan yourself, you would probably tell friends who are all about it. And that’s part of the cleverness of this marketing campaign. It will get plenty of far-reaching, word-of-mouth sharing.

Quite simple. To enter the draw, you have to donate. And the more you donate, the GREATER your chances of being the lucky winner.

You get the excitement of being in the competition and the satisfaction of knowing you are helping a good cause.

For the charity, GEANCO, it should be a powerful fundraising campaign for its efforts to improve education and health in Africa.

And, of course, there’s no point having someone like Benedict Cumberbatch supporting the cause… and NOT asking him to do a bit of acting.

So you can see the star doing his warm up exercises and explaining all things tea in fun style in the promotional video. You may already have watched it on Social Media.